What to do about that pesky R-22 chiller: Part I

While there have not been any widespread shortages of R-22 to date, the price has certainly been reflective of a reduced supply. With a complete ban on new R-22 (either imported or manufactured) beginning January 2020, the supply will continue to reduce. That likely means continued increases in price.

So, what are the options for those R-22 chillers still in use? Certainly, replacing an older R-22 chiller with a new, more efficient chiller is always desirable but it is not always practical in a budgetary sense.

Let’s review the procedure for undertaking a refrigerant conversion for R-22 chillers starting with the refrigerant selection. Part II in HPAC December 2018 will address the conversion procedure.

The following are three of the crucial pieces of information in determining the best choice as a replacement for R-22.

1. System capacity with new refrigerant (compared to R-22): This is pretty self-explanatory. If you have a 75-ton chiller and the particular application requires all of that 75 tons to maintain the design temperature, then a reduction in capacity would not be acceptable. Typically, the capacity for the R-22 replacement should have a capacity that is fairly close to the original system capacity with R-22.

2. Refrigerant mass flow rate with new refrigerant (compared to R-22): This might not be quite so self-explanatory, but still important in terms of complexity and expense of the conversion. The thermodynamic properties will determine what the refrigerant mass flow rate will be in a given application. TEV capacity is based on physical dimensions of the valve pin and port, system conditions and thermodynamic properties of the refrigerant.

Table 2 shows a Thermostatic Expansion Valve (TEV) selection for a 10-ton AC application with R-22. An OVE-10 was selected, and it is operating at 99 per cent of its rated capacity at the design condition.
The table shows eight R-22 replacements, and how the R-22 TEV selection fares with each of the new refrigerant possibilities.

With R-407A and R-407C having similar mass flow rates to R-22, the original R-22 TEV selection is very suitable for application with both refrigerants. The others on the chart do not fare so well. Each has a greater mass flow requirement than R-22, resulting in the original R-22 TEV being undersized for each. The most notable capacity deficiency is with R-434A. In addition, the manufacturer of R-434A states that their refrigerant requires a TEV element that is compatible with R-502 (R-404A).

Certainly, there is no problem using any of these refrigerants as a replacement for R-22. But the TEV replacement adds cost and complexity to the conversion.A note regarding chillers with electronic expansion valves (EEVs): while there is no compatibility issue regarding the use of the R-22 EEV with any of these R-22 replacements, it is important to investigate whether the EEV controller was programmed with the ability to operate with the refrigerant you’re planning on using. This might be the determining factor in which refrigerant is chosen. Worst case scenario is that the controller was only programmed to be used with R-22. This would then require replacing or upgrading the controller, or forgoing the conversion.

3. System efficiency with the new refrigerant (compared to R-22): This is often overlooked. However, a refrigerant that has a reduced efficiency compared to R-22 will result in increased electrical consumption. This should also be a consideration, as operating expenses accrue every month.

In addition to the factors listed above, the following might be secondary factors, which would be considered:

Looking over this list of replacements, with the parameters listed, it becomes easier to make an educated choice. For example: 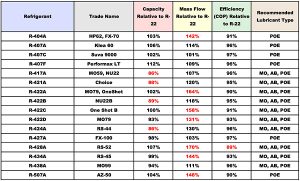 There is a considerable amount of misinformation regarding the pros and cons of various R-22 replacements. It is best to read the fine print to have the necessary information to make the best choice for a replacement.

For instance, in referring to Table 1 (Chemical composition of R-22 replacements), these replacements can be categorized in many ways, one important distinction is those refrigerants that have a hydrocarbon component (which allows the refrigerant to be used with mineral oil), and those that do not have a hydrocarbon component (which requires the use of POE).

One refrigerant manufacturer states this in its Conversion Guidelines: A lubricant change may not be required, but POE is always recommended for optimal performance. Confirming oil quality is important. Check the oil for moisture, acidity, and metal shavings or sediments. If the oil does not meet the desired specification, a complete oil change using POE is recommended. Systems with complex piping schemes or receivers could impede proper oil return so adding or changing over to POE is recommended. And oil change to POE is also recommended for systems designed to lubricate compressor bearings by pulling oil from the bottom of the oil sump, such as with Danfoss SM scroll and Trane 3-D compressors.

The fact is the refrigerant in question does not have a hydrocarbon component in its chemical composition. While there “might” be some systems with short and simple piping runs (package AC units) where one could get away with using mineral oil, this practice is not recommended by compressor manufacturers.

Another refrigerant manufacturer states: Because R-**** is a close match for R22 with similar cooling capacity, energy efficiency, pressures & low glide, it is suited for use in new equipment by Original Equipment Manufactures where it has significant advantages over R-****. Owing to the fact that R-**** is compatible with mineral & alkylbenzene lubricants, it is suitable for use as a Drop-in replacement for R22 in systems which contain an expansion device.

From this marketing blurb, one would think they had stumbled upon the Holy Grail of R-22 replacements but for the fine print: For the same duty R-**** has a higher volume flow rate than R22 which may require OEMs to increase appropriately the sizes of liquid lines to optimize performance, notably the following:

(1) Capillary tube: the length may need to be decreased, the diameter increased or a combination of both.
(2) Expansion valve: recommendation is to that the TX valve is sized to accommodate a mass flow 40% greater than R22. The bulb in a TXV typically used in a R502 system should be used.
(3) Liquid line: the diameter may need to be increased. On large systems with remote air-cooled condensers the liquid return line from the outlet of the condenser to the inlet of the receiver may also need to be modified.

However, OEMs should also note that the liquid viscosity of R-**** is significantly lower than that of R22 (see physical properties table) so that only modest changes to the liquid lines and expansion devices may be required.

To optimize system performance with R-****, evaporator and/or condenser capacities may need to be altered in some cases. The addition of a liquid/suction heat exchanger may also improve overall performance.

In systems where oil return could be an area of potential concern, e.g. containing a liquid receiver, flooded evaporators or long & complex pipelines, the replacement of up to 25% of the oil charge with a POE is recommended starting with an initial 10% followed by increments of 5% until the oil level stabilizes & returns to normal.

No additional commentary besides the red highlights is required, only to point out that with all of the “which may require” warnings, this particular refrigerant is anything other than a drop-in replacement for R-22. Do your own research and read the fine print.<>