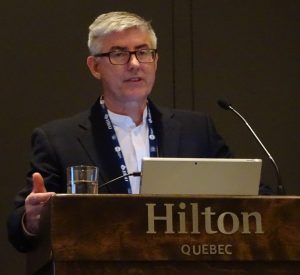 Strengthening regional representation and ensuring money earmarked for climate change projects is spent wisely are among top priorities for Bruce Passmore, who was appointed chair of the Heating, Refrigeration and Air Conditioning Institute of Canada (HRAI) at the organization’s 49th-annual conference in Quebec City, August 16-18. Passmore, of Emco Corporation, described some of his agenda to members during the Chairs’ Banquet on August 17.

He noted the importance of communication with governments and utilities along with industry consultation regarding climate change issues. He also stressed that HRAI will continue investing in online courses, webinars and other educational events.

“There are many regions that could use our support,” said Passmore, while pressing members to encourage their colleagues to volunteer at the organization.

Also during the banquet, HRAI president Warren Healey announced plans to retire from the organization next June. Healey thanked the audience for a fulfilling career.

“It’s time for a new leader to take HRAI forward,” he said.

The conference kicked off with a year in review presentation that, among other areas, described the HRAI’s communications efforts. The organization has gotten a social media consultant and new LinkedIn account, as well as initiating more targeted advertising. It also held its first Day on the Hill in Ottawa, during which HRAI’s board and senior staff meet with MPs and senior public civil servants. The agenda included climate change, door-to-door sales tactics and raising awareness of the HVAC/R industry.

One education session that proved popular was entitled IoT Trends Revealed as it Relates to Intelligent Residential & Commercial Buildings, Net Zero Energy, Controls and Cybersecurity. The session, run by Ron Zimmer, president and CEO of Continental Automated Buildings Association (CABA), focused on intelligent buildings research. Zimmer noted that connectivity through the Internet of Things (IoT) is spreading as technology adoption goes up while costs fall. And while there are currently 20 billion connected devices, Zimmer estimated that number will climb to 80 billion by 2025.

“It will impact on every one of us—as consumers, as home owners, in our business, as consumers how we shop, how we play, how we drive,” he said.

Some places, such as Germany and jurisdictions in California, are moving towards zero net energy buildings, Zimmer said. It makes sense to shoot for zero net energy for new buildings, he noted, although not necessarily for existing ones.

A town hall meeting wrapped up the event August 18 with a panel touching on topics including careers, refrigerants and climate change. To attract new people the industry must spread the word about what the field has to offer, said panel member Bruce Passmore.

“The opportunities aren’t going away quickly. There are great paying jobs,” he said. “It’s up to all of us to paint the industry with a positive start.”

On climate change, the panel looked at how HRAI should position itself as governments move towards greenhouse gas reductions. The industry is evolving and HRAI must keep up, said David Weishuhn, secretary/treasurer and chair, contractors division, also of Blue Flame Heating & Air Conditioning Ltd. Going forward, the government will not introduce incentives for natural gas and is moving towards banning the installation of natural gas in new homes by 2030. Heat pump incentives, however, are on their way, said Weishuhn.