This year marks the 75th anniversary for Little Giant, a Franklin Electric company. It all began in 1941 when a plumber named R.M. “Doc” Wolfe was having challenges with evaporative cooling pumps, and he came up with a solution – the Little Giant vaporizer.

This product was considered to be the first electric motor-driven submersible pump of its kind on the market. Shortly after, the Little Giant Vaporizer Company was founded in Oklahoma City, OK, where 15 employees manufactured submersible vaporizers for evaporative coolers. 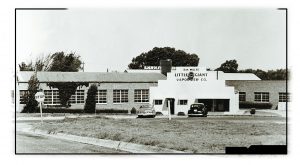 Little Giant originated in 1941 with the name of the Little Giant Vaporizer Company and 15 employees.

After World War II, Little Giant purchased an aluminum die-casting machine and started taking on die casting contractor work in the 1940s to further increase sales and personnel expertise. By 1950 the company developed and manufactured an upgraded Little Giant Vaporizer Pump that could be used anywhere water circulation was a problem. Nearly every decade to follow, Little Giant added to its pump offerings and expanded its focus to battery chargers and steam cleaning machines.

“Little Giant has provided a terrific base business in the wastewater, HVAC and outdoor living channels, and holds strong recognition with key areas of distribution in each of these markets. Much of this can be attributed to consistent product introductions, innovations and a loyal customer base that has continued to make Little Giant their brand of choice for 75 years,” said DeLancey Davis, Franklin Electric vice president and president of North America Water Systems.

“The Little Giant brand was built on dedication to quality and availability and is a testament to our loyal employees who put their craftsmanship into every Little Giant product to support our customers’ craft. We are truly grateful to our ideal collection of employees, customers and business partners who have teamed together for 75 years to make Little Giant the leader it is today,” added Davis.

Little Giant was purchased by Franklin Electric in 2006.