“Why I Weld” contest closes soon 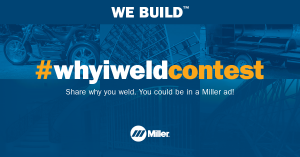 Miller Electric Mfg. Co.‘s #whyiweldcontest giveaway recognizes enthusiastic welders and celebrates the things that inspire them. It is one of three different giveaways in 2017 that are part of the WE BUILD campaign, which recognizes the many ways that welding makes the world a better place.

One welder’s story will be featured in the next Miller ad campaign. Enter by June 30; publicly share a story, photo or video with the hashtag #whyiweldcontest on Instagram, Twitter or at facebook.com/millerwelders. Participants can also enter by completing an entry form on the Miller Facebook page or at MillerWelds.com.

At the end of the submission period, all entries will be reviewed and five finalists selected. The finalists will appear on a voting page from July 21 through August 4, where participants and welders can vote for their favorite. The finalist receiving the most votes will be named the winner and will be featured in a WE BUILD print ad and video. The winner will be announced in August.

In addition, all #whyiweldcontest entrants will automatically be entered for a chance to win an all-expenses-paid trip to Miller headquarters in Appleton as part of the WE BUILD VIP Experience giveaway.

“Miller wants to know and share the reasons that drive people to weld and create something new — the things that inspire and make us feel proud,” said Rich Thompson, vice president of marketing, ITW Welding. “This giveaway honours all the good things about welding, because Miller knows that we build better when we build together.”

This contest is open to Canadian entries, with the exception of Quebec.


Related Stories
Snap a shot to win in Emerson HVACtrain photo contest
Emerson opens up Ridgid trade trip contest to Canadians
March VIP Contractor Program winners are off to Nashville
Check out the latest What Am I? contest