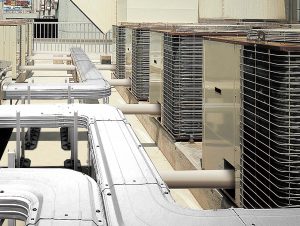 Marketair, which is headquartered in Edison, NJ, has become the exclusive North American importer/vendor for the RD-Series and PD-Series of commercial rooftop enclosure and support systems. Developed by Inaba Denko in Osaka, Japan, the series is designed exclusively for multiple linesets used with variable refrigerant flow/volume (VRF/VRV) multi-split systems.

Marketair acquired the product lines’ distribution rights and inventory in April from the previous distributor. Marketair will continue marketing the two VRF/VRV lineset enclosure systems under the RD-Series and PD-Series brand.

Well-established in the VRF/VRV markets of Asia, South America and Europe, the two series are designed to offer a practical, economical, durable, aesthetic and professional solution for protecting multiple linesets in the rapidly-emerging North American rooftop VRF/VRV system market. The series complement each other and offer labour savings in comparison to custom-fabricated galvanized sheet metal lineset ducting or other fabricated alternatives.

Marketair is establishing separate channels of distribution to sell the series through conventional HVAC wholesalers, as well as a network of bid/spec manufacturer’s representatives.

Originally founded by president Gerry Spanger as a manufacturer’s representative company in 1986, Marketair has reinvented itself as an importer, exporter, manufacturer and distributor specializing in components and accessories for the HVAC industry. The company has acquired several new products for commercial and residential HVAC applications, covering both the ducted and minisplit (ductless) sectors. Marketair operates as a national distributor for smaller independent U.S. manufacturers.