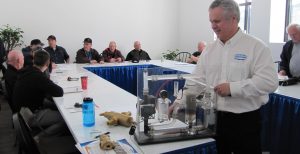 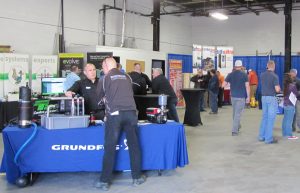 Hydronic sales and service company Roberts Technical Services recently held a Customer Appreciation Day at its Hamilton, ON location. Owner Wade Roberts commented that it was the support of customers, staff and vendors, along with a little help from Mother Nature, that made the event a success.

Over 70 customers took part in a mini trade show attended by key suppliers, including IBC Boiler, Taco Home Comfort/Jess Don, Bradford White, Grundfos and Watts/Palser. Attendees had a chance to hone their product knowledge in classroom sessions on current topics such as ECM pump applications and hydronic air elimination.

The highlight of the day was a Grand Prize draw for a $5,000 travel voucher supplied by Roberts Technical Services that was awarded to Richard Oosterhoff of Principal Plumbing. The second prize of an all-expense paid trip to Holland, courtesy of IBC Boiler, was won by Dave Williams of Williams Kool Heat.

Two all-expenses paid trips to Taco in Cranston, RI were won by Maintemp Heating and Dave Thompson from Groundsource; An all-expenses paid trip to LAARS in Rochester, NH was won by Leed Mechanical Services Inc.; A Thermo 2000 Turbomax 43 Indirect Water Heater was won by William Carey Mechanical; Grundfos Golf Sets were won by Ryan Parker of Flamborough Air Systems and Dave Shipton from Shipton’s Heating & Cooling; A Grundfos Order Case was won by Bruno Morretin from Central Boilerworks; and a Bluejays Ticket Package provided by Grundfos was won by Gary Fisher of Fisher Heating.

In other company news, Roberts Technical Services has added a second pump technician, Shawn Hoogendoorn, to its staff. Services provided by the company include sales and service of pumps and pumping equipment, in shop and on site; analysis and troubleshooting of existing systems; sales of boilers and boiler room supplies; heating system design; energy saving retrofits; and integration of solar solutions to supplement domestic hot water and space heating needs.