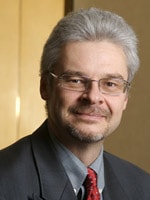 Howcroft has experience working in advocacy, government relations and public policy for the manufacturing and industrial sectors.

Ian Howcroft has been named CEO of Skills Ontario, replacing Gail Smyth, who retired in August 2017. Ray Lavender, president of the board of directors for Skills Ontario, announced the decision. Howcroft served on the board from 1999 to 2015, including a term as president from 2004 to 2006.

“Ian’s history with Skills Ontario, and the extensive industry and government experience he brings, makes him a natural fit to lead Skills Ontario,” said Lavender.

Howcroft has worked at Canadian Manufacturers & Exporters (CME) in various roles since 1988. Most recently, he headed CME’s Provincial Operations and Corporate Counsel as senior vice president.

“I’m very honoured to take on the position of CEO of Skills Ontario and to be able to offer my knowledge and appreciation of skilled trades and technologies, health and safety, and working with government and industry in this important role,” said Howcroft.

Howcroft is also a member of a number of boards and steering committees with a focus on apprenticeship, skill development, health and safety, and labour market information. www.skillsontario.com