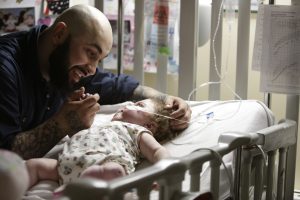 A family crisis or health emergency can hit anyone; and for those in the HVAC industry, preparation for such events can make the difference between coping and disaster.

Residential low-rise sheet metal installer Frank Soares found himself facing such a crisis last year. The Toronto-resident’s daughter Naya, born in March 2016 along with twin sister Milayna, was born with several health complications. The 15-month-old arrived with a condition called Tetralogy of Fallot, characterized (among other problems) by a hole between the heart’s two chambers. Naya was also born with skeletal abnormalities including scoliosis and a shorter left femor. She had a stroke and now uses a pacemaker. She and Milayna were also born premature, at 30 weeks.

Along with the uncertainly surrounding Naya’s health, these complications meant numerous visits to The Hospital For Sick Children for Soares, who works with his stepfather and owns his own company installing furnaces and ducts. But too much time away from work can lead to problems, which Soares had to deal with and make arrangements for.

“A lot of it was time, and not having enough time for work,” he says of those problems. “There were days I would work five or six hours because I wanted to make enough time for Naya, and then I’d have to go home and see Milayna. So there were a lot of time issues—and keeping up with deadlines—while on that time schedule. But I also had a lot of support.”

Soares is so grateful for the care Naya received at SickKids that he agreed to appear in a video, entitled DadStrong, that honours fathers as part of the hospital’s SickKids VS Campaign. The video illustrates not only conditions that Soares contends with on the job, but also his visits to Naya while she was at SickKids.

The SickKids Foundation approached Soares about the video, and was interested in featuring him once they discovered the wet, muddy and challenging conditions under which he often works. Once site supervisors gave permission, the film crew went to work with Soares for two days in May. The first filming day lasted from 4pm to 11pm, with a second day running from 7am to 7pm. “But it was fun, I enjoyed it,” Soares says. “It was a different line of work that I never had any knowledge of. So to see their knowledge and creativity was amazing—it was really cool.”

Soares doesn’t hesitate in answering why he agreed to do the video: “It’s SickKids, how could you not? Anything that I could do to help in any way, even if it’s a video, a picture, any message—anything I can do to portray Naya’s story and make another family feel comfort in knowing that SickKids is there for them and there’s hope. I’m all for helping SickKids whenever I can.”

For other HVAC professionals in situations similar to his, Soares recommends speaking up on the job about the predicament. Explain to supervisors and foremen what’s going on that may cause missed time. At first, Soares says he was reluctant to tell colleagues. But letting them know brought peace of mind. “I felt a lot of comfort once all the guys pretty much knew and it was just out there and they understood,” he says.

Sometimes, Soares had to leave work so quickly there was no time to tell the supervisor he was going to SickKids. If Naya was being rushed into a procedure, he simply had to drop his tools and leave. But since colleagues knew about his situation, there was no need for them to wonder where he had gone.

Another challenge Soares faced was dealing with stress so that it didn’t affect his performance on the job. In construction, a lack of focus can be dangerous, he notes. So it’s crucial to devise a way to separate that stress from the work at hand. “Have a coffee in the morning by yourself and just think about what you’re going to do today,” he suggests. “Whatever way it may be, you have to release that and start the job and do your work. Be ready for that call, but at the same time you have to be focused on your job—if you get hurt and you’re in the hospital, you’re never going to have time to see your daughter.”

For employers with a worker in a similar situation, Soares recommends talking with the employee to devise a plan. Communication is everything, he says, and if there’s a problem with the time an employee is taking off, let them know and make alternative plans to get the job done.

One potential option to deal with employee time off would be to have employees pay into a vacation pay system whereby they could bank hours in case of a health or family emergency, Soares suggests. That way, an employee in a similar situation could then use those banked hours when taking time off. “That would have helped me a lot if there was something like that where I could be at ease knowing I’ve got some hours in—I can take this week off and not worry about what’s going to happen with my workload,” he says.

Naya went home from SickKids May 18, after a 14-month stay. Because of the stroke, she visits Holland Bloorview Kids Rehabilitation Hospital in Toronto every weekday for rehab in speech, eating and other areas. She also makes regular visits to SickKids.

Soares also touts the advantages for employees of paying into benefits. A lack of such benefits would have caused problems for him, he notes. “This could happen to anybody so it’s good to be prepared when you have kids,” he says. “You always have to be prepared. Having some coverage has really helped us a lot.”