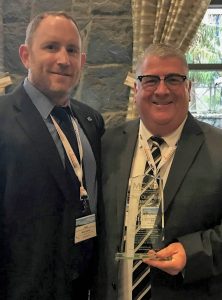 Dan Milroy (right), the 2018 recipient of the Doug Crawford Memorial Award, director of sales and marketing for Bradford White Canada, receives the award from Mike Miller, director of sales for Taco Comfort Solutions’ commercial building services, Canada; Miller is also current chair of the MCAC Associates Council and member of the board of the MCAC.

The 2018 recipient of the Doug Crawford Memorial Award is Dan Milroy, director of sales and marketing, Bradford White, Canada.

The Doug Crawford Memorial Award recognizes an individual, individuals or company who has made a significant contribution to MCA Canada through long-standing voluntary participation, leadership and commitment to ensuring the success of Associate Members.

Members of the Associate Council selected Milroy, who served as chairman of the MCAC Associate Council. His responsibilities also included serving on the MSCC board of directors and the CEC Education Council.

While acting as chair, Milroy participated in the development of MCA Canada’s latest five-year strategic plan, and with lobbying efforts. He spearheaded changes to the conference, including the new reception and supplier showcases. Also, as chairman of the Associates Council, Milroy helped to create the new associates council scholarship which led the way to several awards, including scholarship funding, totaling more than $20,000, awarded to members’ children.

The Doug Crawford Memorial Award was initiated in honor of a long time MCA Canada Associate Member and past Associate Council Chairman–a man who served selflessly and whose efforts were a great example for all MCA members.