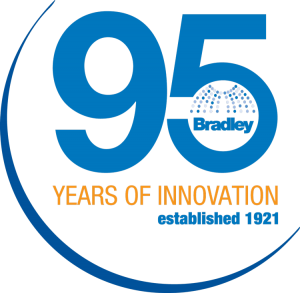 Bradley Corporation, a manufacturer of commercial plumbing fixtures and washroom accessories, is celebrating its 95th anniversary this year. To commemorate the milestone, the company hosted a learning tour of its manufacturing plant for high school students that are enrolled in the Design Engineering Manufacturing (DEM) Center in Wisconsin.

Bradley’s machinists demonstrated equipment and operations, and discussed product materials as well as the production process.

our company’s rich heritage is by reaching out into the community and saluting these bright students, which represent the next generation of design engineering and manufacturing professionals,” said Bryan Mullett, incoming chief executive officer at Bradley.

Mullett represents the fifth generation of the Mullett family ownership and leadership of Bradley, and is one of the founders of the DEM Centre initiative.

In June, he was promoted to president/chief executive officer for the company following the retirement of Michael Sipek, the CEO and leader of Bradley since 2007.

In 1917, Harry Bradley (founder of Allen Bradley Corporation)was investigating a way to reduce the floor space required for a bank of sinks, and to help workers wash their hands quicker so as not to waste all their break time standing in lines.

By 1918, “washfountain” prototypes were created that allowed multiple users to wash up quickly. Harry Bradley patented the concept in 1919. When word spread of the revolutionary product, Bradley decided to sell the patent in order to concentrate on his own business. In 1921, The Bradley Washfountain Company opened for business with Gustav Grossenbach, Louis Schlesinger, and Howard A. Mullett as founding partners.

The early circular washfountain, which sprayed water upward from the bottom of the bowl, was constructed as one piece. In addition to being sold for traditional industrial hand wash use, the fixtures were also used for flower planters, aquariums, rock terrariums, and even as fresh fruit produce displayers. The first washfountains, were hand operated. The first foot-operated models were introduced in 1925. This same year saw the introduction of the semi-circular washfountain.

Due to user complaints of getting soaked by water surges, the upward water discharge was redesigned in the early 1930s to feature a down pointing sprayhead. Management also designed a two piece bowl to make the product easier to ship and install.