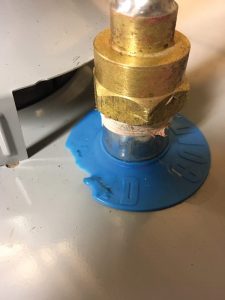 The plastic grommets around the inlet and outlet water lines at the top of the tank were partially melting.

I have the opportunity to visit many different jobsites over the course of my workweek. Sometimes it is to do some on-site training, sometimes it is to inspect and consult on an ongoing installation, and quite often it is to troubleshoot equipment that does not appear to be operating as designed, if at all.

Customers quite legitimately have an expectation that when they purchase and install an item it will work as advertised. When it does not we typically deliver a replacement as promptly as possible. On some occasions and in some circumstances I like to visit the site and verify the problem is indeed with the equipment rather than an incorrect installation or unusual site condition.

A site visit was in order recently after we received a call from a contractor regarding a hot water tank he had just purchased and installed. It was an atmospheric chimney vented hot water tank and he was concerned because the plastic grommets around the inlet and outlet water lines at the top of the tank were partially melting.

These pipes are inches away from the flue gas vent connection off the top of the tank and if the grommets were melting this would almost certainly be evidence of a blocked chimney, not a defective tank. I received the request from the branch manager and had not yet spoken directly to the customer so I called him immediately to ensure that the tank was not left operating and thankfully it was not.

I arranged to meet the contractor on-site. He had told me he did not initially think the flue was blocked since he was able to hear to the outside through it. We both agreed that flue gases were responsible for melting the grommets.

When I arrived at the two-storey, semi-detached house, I noted there was a bird’s nest in the offset of the eavestrough downspout.

Nesting birds or squirrels are often the culprits when you have blocked flues. We got a ladder out and climbed onto the roof, I fully expected to see the chimney termination converted into a bird condominium, however this was not the case, the vent cap was still in place and the vent appeared clear.

Bird carcasses in various degrees of decay were totally clogging the chimney.

I removed the cap and looked down with a flashlight and still no sign of anything, although there was an offset so I could not look down the entire length. Although I could not see evidence of a blockage, my nose could definitely smell what seemed to be something rotting. I asked the contractor to go down and turn the hot water tank on, after a couple of minutes of operation, there was no flue gas whatsoever coming up the chimney, it was completely blocked.

The bottom of the chimney was located behind the furnace and was not easily accessible. Fortunately, my Houdini-like contortionist ability, combined with a good whack from a broom handle, removed the base cap from the chimney. Out fell the carcass of a bird, soon followed by quite a number of additional bird carcasses in various degrees of decay.

I had fully expected to find the chimney at least partially obstructed by a bird’s nest, I was not however expecting to find so many birds. I do not know if all these birds had entered the chimney in the two or three days between when the old tank failed and the new one was installed, or if this issue had existed prior to the new tank being installed. I do know that it was a very dangerous situation and I am very happy that in this case the only victims were avian rather than human.

Sadly, the outcome is not always this way. As I am sure is the case with most of us, I have long been aware of the danger of carbon monoxide (CO), and this incident serves as good reminder and provides an opportunity to review the facts and best practice to ensure CO deaths go down and not up.

Statistics are not easy to nail down, however the Canadian Association of Fire Chiefs estimate there are an average of 50 accidental CO poisoning deaths in Canada annually. CO gas is odourless, colourless and tasteless so it is impossible to detect without a good working CO detector, something that was not installed in the home I visited. This has been corrected now however, and the vent termination also now has a bird screen protecting it.

Detectors are mandatory across the country in new housing as of the 2010 national building code, however Ontario is the only province that currently also mandates CO detectors in existing homes. Ontario enacted their legislation following the CO deaths of a family of four in Woodstock, whose chimney, much like this one, had become blocked. Hopefully the other provinces and territories will not wait for similar tragedies to motivate legislating mandatory CO detectors in all residential buildings, new or existing.

The hot water tank in the home I visited would not likely to have produced high concentrations of CO gas as only two people lived there and the tank would have only run for short periods intermittently. However, it is important to know that low levels of CO can accumulate, so death can occur from numerous short exposures to low levels just as easily as prolonged exposure to high levels.

Ultimately, it is always better to be educated and safe rather than rely on good fortune. Regular inspection of all venting and vent terminations should be a part of every maintenance program or schedule. Fuel burning equipment should be inspected, maintained and cleaned annually. Outdoor BBQ’s, generators, and appliances should never be used indoors or even in attached garages. Regardless of whether or not you live in a jurisdiction that mandates them, please ensure that every living space has adequate working CO detectors to protect each and every human occupant. The birds will have to fend for themselves. <>