When the Edmonton winter rolls in, Phil Wilson is grateful for any opportunity to stay inside and out of any blizzard-like conditions when they arise.

As a distribution operator for ATCO, a utilities service provider based in Alberta, a large part of Wilson’s job involves travelling around the city attending to utility service calls. Especially during the winter months, many of the calls he receives are simple fixes, like a dirty filter that needs to be cleaned.

“Sometimes we get calls for something as simple as dead batteries in a thermostat,” Wilson says. 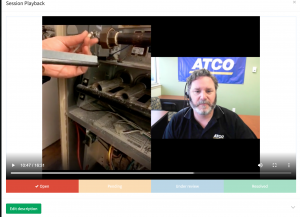 Factoring in the time it takes him to drive from the ATCO office to a service call, which in some cases can take close to an hour, Wilson has spent many an afternoon fixing a simple problem that could have been solved in minutes.

Until his employer started using ICwhatUC, a customer self-service support system that uses live video chat and augmented reality to assist in solving the simpler HVAC issues, like dirty filters and dead batteries.

Founded by technology entrepreneurial trio Guillermo Salazar, Luke Krueger and Danny Way in Calgary after struggling with simple HVAC fixes in their own homes, ICwhatUC aims to simplify the troubleshooting experience for both customers and the technicians through video chat. Think Skype or FaceTime—only the customer does not need to download any new software or add the technician as a forever contact.

“People can do a lot of these fixes themselves, they just need expert guidance,” Salazar explains. “We wanted to create a way to deploy that expert guidance. Right now, people are comfortable using apps like FaceTime, but maybe you don’t want to become a contact for that person or maybe you’re on an Android phone system, there were all sorts of barriers to using preexisting video chat apps.”

So the founders decided to create their own augmented reality platform, to fill in the gaps where other video chat platforms fell short.

“It’s user friendly, even your grandmother could use it.”

ATCO has been using the app across Alberta since December. Wilson says he has used it for over 75 calls in the past month alone. The feedback he has received from customers has been overwhelmingly positive.

“I consider this to be the time where we’re really going to see how the program works for us, because this is the time where it’s going to benefit the most number of people,” Wilson says. “If it’s -25C and you might have to wait 12 to 24 hours for a service person, if I can solve your problem for you this way, and it takes an hour, that’s a real benefit. That’s another 12 hours you’re not freezing in your house.”

The app is also minimizing risks for technicians, limiting their travel in blizzard-like conditions to only truly complex troubleshooting cases.

There are a laundry list of benefits to the platform, but Salazar acknowledges that it may be difficult for some technicians and customers to accept. So far, the system has only been used by companies like ATCO, which offer service coverage to customers for a monthly rate and employ salaried technicians.

“It’s a bit controversial. On the one hand, we’re changing the way this service is being delivered. For some HVAC professionals, they see this as a threat,” Salazar says. “At the same time, we’re allowing technicians to earn revenue from wherever they are. They could be out fishing when they accept a call, but then they can service the issue remotely and still bill for that time.”

For Wilson though, answering service calls via video chat isn’t so different from helping friends and family troubleshoot HVAC problems, something he has been doing for years.

“You know how it goes, when you do something like this for a living, all your friends and family start to phone you and ask for free advice,” Wilson laughs. “You do get used to answering questions over the phone.”

While the app is still in its early days, Wilson believes it has a strong future in the HVAC industry. ATCO plans to use ICwhatUC, examine the results and feedback from both customers and technicians, and then decide whether or not to continue using the service.

“It’s still in the early days, but so far the evidence shows we’re solving problems a lot quicker,” says Wilson.

For many technicians, it may be a matter of learning to embrace the technology and how it can benefit their business.