Is electric the only way to go?

Live Better Electrically was a popular theme promoted by electric utilities around North America in the late 1950s and early 1960s. A Gold Medallion Five Star home would have nothing but electric appliances: stove, washer and clothes dryer. To qualify for the lowest cost Five Star electricity rate, a residence would also have electric space heating and water heating. Sometimes an electric furnace or hydronic boiler supplied the space heating requirements; however, electric baseboard units provided most space heating.
Builders loved electric baseboards as they were cheap to install, electricians did all the hookups, and no ugly bulkheads were necessary to hide ductwork. Electric baseboards are still used in new construction today, especially in Quebec where hydro rates are a bit more favourable than other parts of Canada.
In 2016, Canadian homes are filled with electric appliances, many of which were still in the realm of science fiction in the 1950s. However, it is rare to find a straight electric furnace without a secondary source of heat such as a heat pump or even a wood stove in the family room. Electric water heating is typically confined to rural areas off the gas mains. 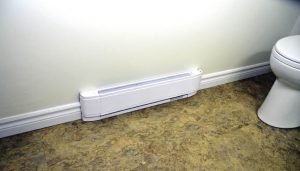 Figure 1 Classic baseboard heater. Baseboards are easily installed, quiet, easily maintained and very inexpensive. There are likely millions of them still in service throughout Canada today. 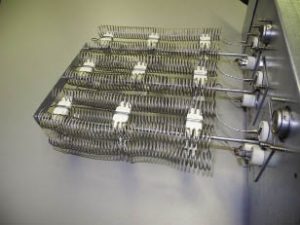 Figure 2 Typical slide-in heater kit to fit a specific manufacturer’s air handler. The open coils are always live, even when not calling for heat as one leg is constantly energized. The two circular discs on either side at the top are thermal limits. Fusible links are connected at the bottom as a failsafe to prevent runaway heater operation. 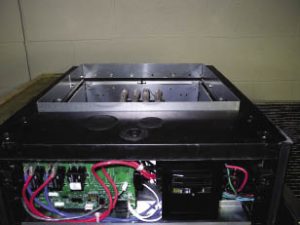 Figure 3 Main electrical disconnect switches. While they are circuit breakers, the main electrical safety circuit must reside in the building electrical distribution panel. Contactors were used in this model to power the other leg of the heater circuit when signaled by the thermostat. The big disadvantage of using contactors (based on homeowner complaints) is the loud “snap” they would make pulling-in, which is especially noisy and irritating at 3 a.m. when all was quiet in the house. 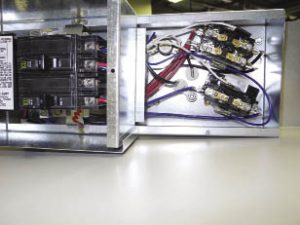 Figure 4 Late model slide-in heater kit using electronically controlled switching relays that are significantly quieter. In the latest designs, the relays remove power from both legs of the heaters when the heating cycle is done.

It is not as if there is no electric heat being used in Canada today. On the contrary, it is a reasonably stable industry with several Canadian manufacturers leading the way with a multitude of products. Thermolec, a Quebec-based company, has a range of commercial duct heaters, plenum heaters, make up air heaters and an electric boiler. Stelpro, with two manufacturing plants located in Saint-Bruno-de-Montarville and Grand-Mere, Quebec, produces over 800,000 heating units yearly including electric baseboards, convectors, fan heaters, heating cables, and so on. Also located in Quebec, Ouellet is manufacturing a wide range of residential electric space heating products ranging from baseboard heaters, kick-space heaters, wall convectors, radiant heaters, electric furnaces, floor insert heaters, floor heating cable mats, and heating cable for snow melting. Dimplex, with an office in Cambridge, ON, has a similar wide range of products including solar hot water and a storage heater that stores heat by warming ceramic bricks with off-peak heat to be used later in the day when prices go higher.

I find it disheartening that governments continue to subsidize alternative methods of generating electricity and electric cars. I agree with the Science Council and other environmentalists who say the best answer is to use less. Forget about subsidizing alternative energy and electric cars, spend some of the money on building better buildings. Subsidize existing homeowners and commercial building owners to cut their 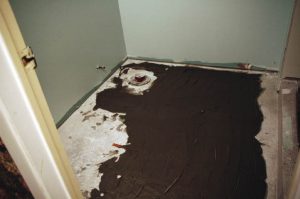 Figure 5 and 6 Installation of a 209 watt floor warming cable in a small basement bathroom. The infrared thermometer shows the formerly frigid basement floor is now a comfortable 25C. 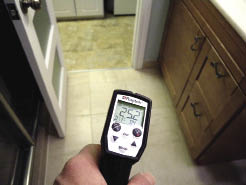 heat loss by 50 per cent or more as soon as possible. There are still commercial buildings out there without a stitch of insulation in them. Subsidize new home construction to Passivhaus standards if necessary; get the heating load minimized at the outdoor design temperature.

Our industry will be there with electric heat: small inverter drive heat pumps strategically zoned or small duct high velocity systems with inverter heat pumps, and maybe a small amount of backup heat or small electric boilers as part of a zoned hydronic system providing domestic hot water too. There is a lot of work for us all to do to help everyone to use less.

Author’s note: I suggest reading a book called: Green Illusions, The Dirty Secrets of Clean Energy and the Future of Environmentalism by Ozzie Zehner. The section on solar panels will make you want to scream.

All in a day’s work

While I have championed the benefits of using electric heat over fossil fuels, there is no free lunch when it comes to proper specification, proper installation/commissioning, and proper maintenance (PSIM) of electric heating equipment. Electricity is dangerous: electrocution, arc flash, and fire are real dangers waiting for the sleepy/careless tech, installer or other unsuspecting person disrespecting Mother Nature. Installers must follow the installation instructions and the governing electrical codes.

Service technicians must always inspect electrical devices for proper wire sizing, good grounding and loose connections that cause overheating and potential fires. When a conventional heat pump has been specified for a typical duct system in an existing building, be sure the system can handle the required airflow. A three-ton conventional heat pump, for example, may well be AHRI certified to deliver maximum HSPF at 1200 cfm. However, if an electric heater kit has been added to the air handler, more airflow beyond 1200 cfm might be required. Be sure to check your manufacturer’s specifications.

Why aren’t we heating with electricity?

Electric heating is 100 per cent efficient, even an electric baseboard heater is a more efficient space heater than the best gas furnaces on the market. It does not need a chimney or a horizontal vent pipe, ductwork, or a drain. Baseboard heaters have few installation drawbacks, are easily maintained and easily replaced, have no carbon monoxide worries, offer quiet operation and are inexpensive to purchase.

I know why we are not heating with electricity. Electricity is expensive to generate and to distribute to end users.

In the province of Ontario, runaway costs have pushed ratepayers to the limits of affordability and residents of other provinces are struggling too. Ontario spent years and billions of dollars in a headlong quest to satisfy an unsubstantiated notion that electricity production should be expanded indefinitely.

Canadians were eager to embrace the benefits of labour-saving electric appliances, subsequently creating a huge manufacturing industry employing many thousands of workers.

Ontario Hydro started an enormous infrastructure development program in the 1950s, starting with an expansion of the Niagara Falls facility called Beck II, another huge dam was built as part of the St. Lawrence Seaway project and an all-out expansion of coal generating facilities coupled with requisite transmission lines made Ontario a busy place. Nanticoke, owned by Ontario Hydro, was the largest coal-fired generating station in North America. Commissioned in 1978, it was the last coal-fired station to be decommissioned in Ontario in 2013. Its proclivity for generating air pollution, acid rain, and CO2 pollution won’t be missed.

After World War Two, the leftover echoes of the famed Manhattan Project that brought the Hiroshima and Nagasaki bombs into being, sought a civilian outlet. As a flimsy knowledge of how to go about generating electricity with the atom evolved, North America went on a nuclear generating station construction binge.

In 1954, the U.S. Atomic Energy Commissioner, Levi Strauss, insisted that soon nuclear energy would be “too cheap to meter.” There is nothing cheap about nuclear power, as the province of Ontario would soon discover. Pickering A nuclear plant came on-line in 1974, $218 million dollars over budget (in 1974 dollars, I was making around $4.00 an hour then).

Later, the Darlington facility was built at a cost of 14 billion dollars, almost 10 billion over budget. Darlington went on line in 1993 and is now in the process of a multi-billion dollar mid-life renovation. The nuclear generating stations in Ontario, including the plant on Lake Huron, which is leased to British Gas, have been money pits absorbing tax money and user fees with unabated abandon. The requisite and on-going infusions of cash into Ontario Hydro’s chaotic energy policies pushed the heating market into the arms of natural gas suppliers.

The ever-expanding costs related to providing all forms of energy, including electric power (especially from nuclear plants), caused the Science Council of Canada (SCC), in 1977, to urge Canadians to adopt a conserver society. The SCC said all new buildings should be more efficient and much better insulated; obviously the SCC was ignored.

The first Prime Minister Trudeau brought Amory Lovins, an American physicist and environmental scientist, to Ottawa during that time for consultations on Canada’s energy policy. Lovins believes in developing a “soft energy path” that focuses on energy efficiency and renewable energy sources. Lovins thought heating with electricity was comparable to using a chainsaw to cut butter! While I have great respect for Lovins, I fundamentally disagree with his ideas regarding electric heating. In March 1979, the nuclear reactor housed in Unit 2 of the Three Mile Island facility near Harrisburg, PA suffered a partial meltdown. Even though no one was harmed in the incident nor have any human health consequences been suffered by local inhabitants, the fear of a potential nuclear “China Syndrome” put an end to the construction of any more new nuclear plants in North America.