A retrofit project at the community area in Bridgetown, Nova Scotia led to a cost-saving opportunity. 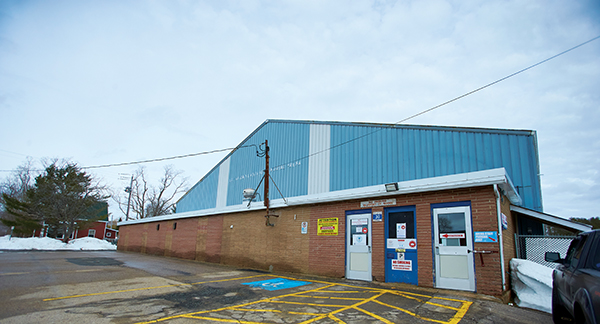 The Bridgetown Arena was built in 1976, refurbished in 2003, and more recently received an investment in new heat pump technology.

Communities of all sizes across Canada rally around their local hockey teams and arenas, and in October of 2001 the small town of Bridgetown, Nova Scotia located in the Annapolis Valley, was forced to close down its Bridgetown Arena after an assessment confirmed the community’s fears – the arena roof was deemed structurally unsound.

The arena needed repairs amounting to $400,000, and by the following year a $110,000 provincial Recreation Facility Development grant was issued and the community then rallied and raised the remaining funds to get the project going.

The work was finally completed and the facility reopened in March of 2003, allowing local hockey teams and other recreational skaters to return to their home ice.

Locals and guests skated through many years with very few changes at the re-opened arena. Then, in an effort to reduce the facility’s energy consumption, the community sought an alternative to the electric resistance fan coils that had always been used to heat various areas in the building outside of the rink itself.

“I skate at the arena, and we have an ad on the rink boards,” says Dale Comeau, founder and owner of Comeau Refrigeration in Bridgetown.

The facility is near and dear to a lot of people and small businesses in this area, as it serves a variety of athletic programs beyond hockey and as a local gathering place.

Comeau Refrigeration was founded in 2008, and in time the company became a local Fujitsu dealer, after The Master Group, the region’s distributor, felt confident in Comeau’s ability as a seasoned refrigeration professional. He quickly realized the potential of the relationship and completed as much training as possible, while simultaneously marketing the product locally.

“We developed a reputation for installing mini-splits,” says Comeau. “A large part of that solution was, and is still, installing systems specifically designed for their resistance to ice accumulation on coils. This became a number one selling feature, along with efficiency and comfort. Our name came up in early conversations about improving the heating systems at Bridgetown Arena.”

According to Comeau, there were a number of issues that the Bridgetown Community Recreation Association (BCRA) wanted to address at the arena, most of which Comeau was already familiar with.

“Energy efficiency is now our priority,” says Steve Clayton, who’s been a BRCA board member since the 1970s, and chairman for the past 20 years.

“After that, it’s comfort, reliability and control. The original electric resistance units are expensive to run, loud, inconsistent, and each one needs to be turned on and off manually, which was a chore for those of us who take care of the arena.”

Before submitting a bid, Comeau compared the use of Fujitsu mini-splits with light commercial VRF systems.

Both would have accomplished the desired result, but using VRF systems dramatically reduced the number of outdoor units and offered simple centralized control. One other bid was collected for the project, but Comeau Refrigeration won the contract.

BRCA wanted to retrofit all of the spaces that were originally heated–meaning everything but the rink itself. 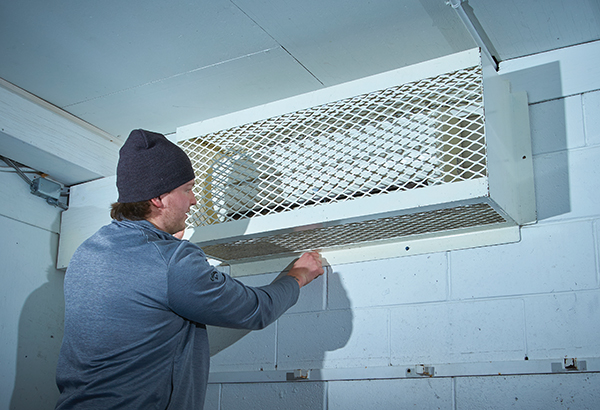 “We used a -10C design temp at the arena,” said Comeau. “Environment Canada and the Heating, Refrigeration and Air Conditioning Institute of Canada (HRAI) suggest -18C, but the existing resistance heat remains in place.

“I don’t think the resistance heat will ever be used, but it’s there [for backup]. Natural Resources Canada now gets involved with the engineering of systems like this and they help to procure grants, etc. They recommend system design to about 80% of the load, with electric resistance backup, allowing us to maximize heat pump efficiency.”

Comeau installed two, five-ton Airstage J-II VRF units on the ground-level outside of the building, each fenced in to prevent any possible damage. 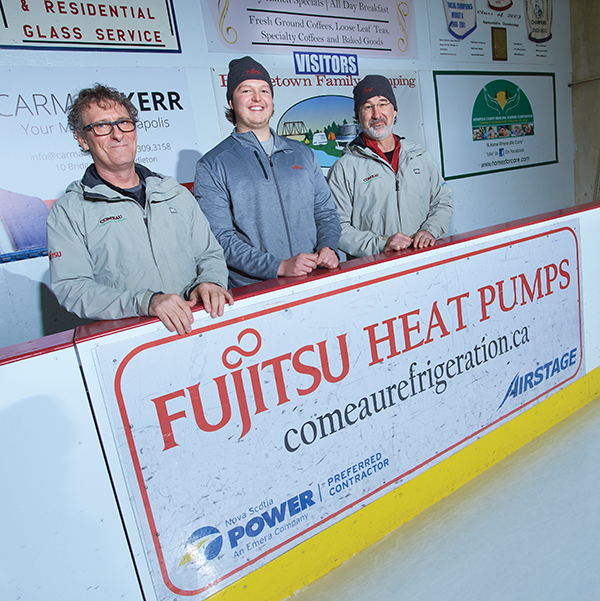 Inside in the building 14 zones are conditioned with wall-mount units ranging from 7,000 to 9,000 Btu/h, and a single low-static ducted unit in the Zamboni room providing up to 14,000 Btu/h.

“Even though it’s usually unoccupied, the Zamboni room must be kept warm,” explains Comeau. “Zambonis can cost six-figures, and they contain water, so keeping it well above freezing isn’t an option. That room also houses a lot of mechanical equipment for the rink, so there wasn’t much room on the walls for an indoor head. That’s why we used the ducted air handler.”

Installation of the heat pumps took several months as the team at Comeau Refrigeration worked around the arena’s schedule.

“The job was straightforward, though VRF systems can require more time to install than mini-splits, at least in a building like this,” says Comeau. “The facility is steel framed and most of the partitions are cinderblock. To run line sets and wiring, we had to drill some walls and work around the steel structure. Obviously, the refrigerant headers are inside the building as well.” 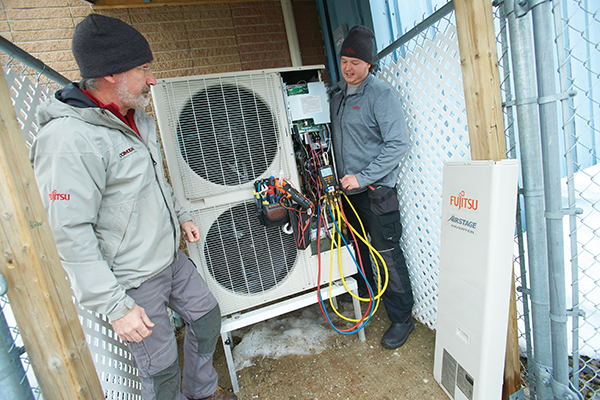 Dale Comeau (left) and Kenneth Tulley of Comeau Refrigeration check one of the arena’s two single-phase five-ton Fujitsu J-II VRF units. They are located on ground-level and fenced in to prevent damage.

Many of the indoor units are protected by custom-fabricated metal cages to safe-guard from misguided hockey sticks, airborne helmets, etc., and where line sets are exposed, Comeau installed wooden trim around them for greater protection.

The control panel for all of the units is centralized in an upstairs office. Most of the spaces are kept at 20C. Because the original electric resistance heaters were controlled manually, arena guests could turn up the heat to whatever pleased them. That’s no longer a concern.

“Everything about the new system is a major improvement,” says Clayton. “Temperatures are much more consistent, and not having to walk around the building twice a day to turn the heaters on and off is a big plus. Best of all – our energy bills are much lower.”

Because the electric bill reflects total facility consumption, Clayton can’t pinpoint exactly how much the heating costs have fallen. The rink’s mechanical equipment was upgraded at roughly the same time as the heat pumps, and LED lighting was installed as well.

“The retrofit was a huge part of the energy improvements here,” notes Clayton. “The savings are much needed, too. After all, the facility was built in 1976, so there’s plenty of upkeep. The retrofit avails funds for other projects. It was a fantastic change, and the systems work just as Comeau said they would.”

Looking forward, Clayton is hoping that some of the energy savings can be used to fund a large photovoltaic array installation on the arena roof.

The Bridgetown Hawks girls’ hockey team takes to the ice for practice.

“This was our first VRF project,” says Comeau. “It didn’t present any major challenges, and if it had, we knew that we could rely on Master Group for tech support. So we went into this project with a lot of confidence.”

Since completing the Bridgetown Arena project, Comeau Refrigeration has found the flexibility of VRF to be a great advantage on other projects.

“We’re getting some VRF traction in the residential market,” he says. “The housing market in Nova Scotia is extremely hot. People are buying properties way over asking price and making big investments and improvements. Some of these have been good fits for Airstage systems.”

According to Comeau, the biggest determining factor for use of VRF technology in residential applications is room count. With VRF, large houses with many zones can be served by a single outdoor unit, while it still makes sense to retrofit smaller homes with mini-split systems.

The federal government is promoting and offering grant programs for homeowners to move from fuel oil, which is still common in some areas of Atlantic  Canada, to electric heat pumps.

“Canada is taking bold steps toward decarbonizing the country,” says Comeau. “Heat pumps are a great tool to achieve that goal, and VRF systems open up a lot of opportunities that weren’t available for heat pumps just a decade ago.” <>

Dan Vastyan is president of Common Ground, specializing in marketing communications and serving the North American construction industry with a focus on plumbing, mechanical and HVAC markets. danv@seekgc.com