Take a logical and systematic approach to determining the final cause of equipment failure, and then take it a step further to determine the actual root cause. 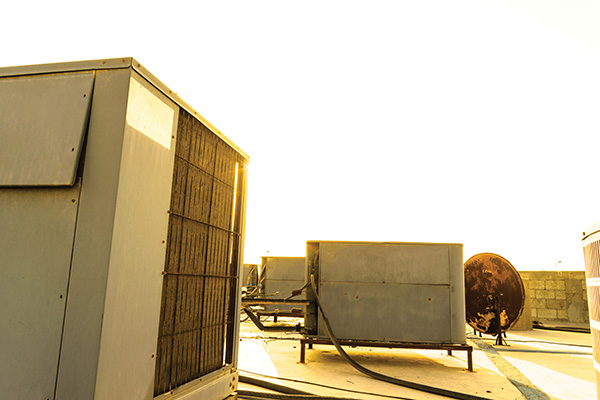 I have written on this topic in the past and have likened the role of an air conditioning/refrigeration technician to that of a doctor. With that comparison, the competent technician will have gone through an internship/residency (apprenticeship) period, which may last upwards of five years. During this period, through a combination of classroom and on-the-job learning, the apprentice technician will have acquired the necessary knowledge and field experience to become a competent journeyman technician.

Here are the steps:

While there might be several potential causes for a given failure, a process of elimination will result in pinpointing the exact cause. 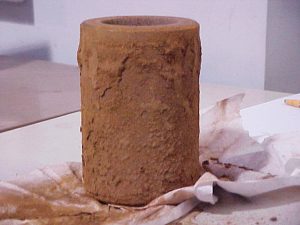 Example of a plugged suction filter-drier

Troubleshooting includes the in-depth analysis of the ultimate equipment failure and identifying the root cause of the failure.

Now, this is where the technician can either simply reset the tripped control and chalk it up as a “nuisance” trip, or spend a little time to determine the real cause of the trip. The less than average technician, or perhaps even average technician, will take the easy road. The expert troubleshooter will spend the time necessary to find the root cause of the failure and then correct whatever that condition is.

The suction filter-drier was plugged up and the resulting reduction in suction vapor velocity inhibited the oil from returning to the compressor. But what caused the suction filter to plug up?

Well, an analysis of the removed suction filter reveals that it was plugged with decomposed oil.

What causes oil to decompose? Heat.

What causes the level of heat in a system necessary for the oil to decompose? Let’s go up to the roof and look at the remote condenser.

So, the logical and systematic approach to this problem found that the compressor was inoperative due to the oil failure control trip. 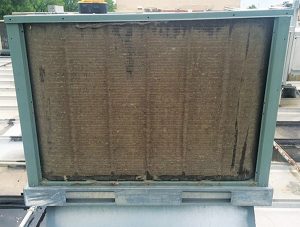 A dirty condenser, from a lack of maintenance, can lead to trouble

Further inspection noted that the compressor crankcase was nearly empty, which caused the low oil pressure condition that resulted in the oil failure control trip.

Removing the filter-drier for inspection revealed the source of the contamination: decomposed oil. Mineral oil will start to decompose at 350F. Oil decomposition occurs in several stages: initially forming a varnish (thicker and darkened oil); the next stage is a sludge (thicker than varnish and even darker); the final stage is a carbonaceous powder (solid contaminant). It was this final stage of decomposition which plugged the suction filter-drier.

Now if the suction filter-drier was plugged up it would be a good assumption to expect that the liquid filter-drier would be partially plugged as well. Both filter-driers were replaced, and the system was then restarted.

The next step was to determine the cause for the discharge temperature to be in excess of 350F. This led the technician to inspect the condenser, where he found a severely fouled condenser surface. After a thorough cleaning, the discharge pressure (and corresponding discharge temperature) were reduced to normal levels, eliminating the condition which caused the oil decomposition. The dirty condenser was the result of a lack of maintenance.

Now, this is only one of hundreds (if not thousands) of possible system failures that a piece of equipment might suffer. Some failures are complex (as in the example cited above), while some examples can be quite simple—a loose pipe clamp which caused the pipe to rub against the strut the pipe is attached to and wearing a hole in the pipe. The hole allowed refrigerant to leak out of the system, which resulted in a loss of cooling capacity. This doesn’t require a lot of analysis to get to the root cause. Repair the leak, tighten the clamp, and inspect other clamps to make sure this condition isn’t repeated. Once again, a lack of maintenance.

Or consider a failed motor. Perhaps the motor had reached the end of its useful life and the bearings finally seized. Or perhaps it could be the result of an overzealous in-house maintenance tech who overgreased the bearings.

Excessive grease volume (overgreasing) in a bearing cavity results in the rotating bearing elements beginning to churn the grease, pushing it out of the way. This results in energy loss and rising temperatures, which then leads to rapid oxidation (chemical degradation) of the grease and an accelerated rate of oil bleed (a separation of the oil from the thickener).

The heat that has been generated over time combined with the oil bleed will result in the grease thickener decomposing into a hard, crusty build-up that can impair proper bearing lubrication and even block new grease from reaching the core of the bearing. The end result is an accelerated wear of the bearing’s rolling elements and then ultimately a component failure.

When troubleshooting reveals a component failure, typically that component is replaced. For example, an evaporator is underfeeding, resulting in an inability to maintain proper space temperature. 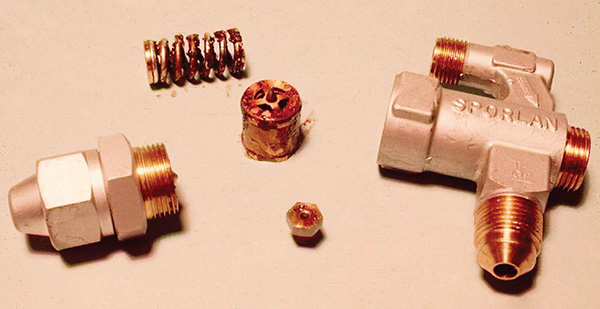 Example of a plugged TEV

The system is pumped down, the TEV removed/replaced. The system liquid filter-drier is also replaced (good practice anytime the system is opened up). The system is then evacuated and restarted. The space temperature drops to the set-point, and a check of the superheat at the evaporator outlet reveals that it’s now at 8F. Perfect superheat for a medium temperature refrigeration application.

Once again, this is where the average technician will take the easy route, complete the service ticket, get a signature from the customer and then leave the site. The expert troubleshooter will not be satisfied until the cause of the TEV failure has been determined. An “autopsy” is performed on the TEV, including a disassembly to inspect the internal components so a failure analysis can be made.

Once again, decomposed oil is the cause. This time it has plugged up the TEV port and restricted free movement of the pin carrier assembly. This failure can also be attributed to excessive discharge temperature, which was caused by a dirty condenser. And once again, a lack of maintenance.

Again, there are hundreds (if not thousands) of possible causes for system failures. The important point here is that without a complete and thorough analysis enabling the technician to get to the root cause of failure it’s likely the system will experience a repeat failure in the future.