Hydronic controls: A look ahead

When I started my career some 25 years ago hydronic controls were pretty rudimentary. At best, they could control what they were designed for, but they were pretty much standalone. There were little application controllers and were often only good for one purpose. In many cases, that meant single-device controllers, like mixing devices, or single-stage boiler controllers. When multiple controllers were needed in larger systems, it was not uncommon for one controller to compromise the operation of another because essentially, each one was operating blindly and not in conjunction with one another.
Control manufacturers realized that there needed to be some way of allowing controllers to work together to provide better system functionality and/or when one controller needed to ‘tell’ another that it needed its support. One controller would then enable or disable another through end switches. This simplistic method still exists today.
More advanced control systems began to communicate with one another through standalone proprietary communication amongst like controllers, or through industry acceptable communication platforms such as BACnet or LON. The overall system performance was greatly enhanced, one controller would understand what another controller was doing and devices connected to one controller could respond to system requirements managed through another. This helped to eliminate the need for a lot of external relay wiring.

An example of communication is captured in Figure 1. Communication can be achieved through hardwired connections, or wirelessly through antennas and repeaters. Even though wireless communication has come a long way in recent years, I have found there is a hesitancy to abandon the wiring and to utilize wireless communication alone. It is, however, just a matter of time before wireless takes off and the wiring in the future will be limited to operational devices or mechanical equipment. All communication will eventually only be handled through wireless means.
Once communication was in play, many additional functions could be added. Those are not limited to, but include items and features such as indoor temperature feedback for enhanced fluid temperature control, scheduling, scenes, sharing of sensors across network, alerts and notifications, integration of several mechanical devices together with large terminal units or generation equipment.
As more pieces now work together and several controllers interact with one another, when something is not performing to expectation, the controller can self-diagnose in some cases and provide a warning and troubleshooting support.
As I see it, there are three types of communicating control systems available today:
1. Specialized and focused control manufacturers that build their own communicating platform and controllers to look after a particular system. They do this closed loop and without the ability to run a third-party manufacturer into the mix. These can often integrate into other systems, but they cannot be paired with other system controllers as part of their dedicated network. These systems are smaller in nature and applications often include higher-end homes and smaller commercial systems.
2. Application control manufacturers with enough pieces and application controllers to build complete systems. These include high-end homes and mid- to intermediate-size commercial systems. These often use an open communication protocol as mentioned earlier and can be added on with third party controllers. There are some component manufacturers that offer these systems as part of a system solutions package.
3. Full-scale building management systems consist of hardware building blocks and a programmer can write a program to basically control absolutely anything that he wants. Its only limitation is the programmer’s capabilities. This will typically not be limited to a HVAC system and will often expand into the lighting, security and access world of controllers. With these, a programmer can integrate any other third party control manufacturer, as long as the same communication language is used, or a translator device is communicated through. These are typically used for large commercial systems.
Many of these systems are already connected to the internet and be accessible from virtually anywhere in the world at any time. They can also provide status updates and warning emails when any part of the system is not performing as needed. The ability to remotely troubleshoot a system helps streamline the service of a building. 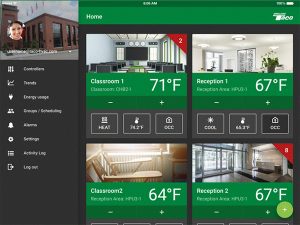 Today more end users want to see nothing on the wall, requiring blind button type sensors for space temperature control, rather than digital thermostats. The user interface is expected to be available on any digital mobile device, or central computer screens. An example of such screens can be seen in Figure 2. It is preferred that mechanical equipment be shown in the installer/maintenance access levels.
In the not-so-distant future, the addition of communication to devices will make each mechanical piece operated through a control system a smart device. Smart devices will then communicate their own “health-of-life” information to a control system for inclusion in a maintenance routine.
The next development will likely be the integration of power and energy generation equipment, such as solar and geothermal. If you follow European trends, you will note power generation is the next big thing there. Equipment controllers are beginning to look at off-peak accumulation and storage capacity to allow for stored power use during peak times.
The same will become true for energy management systems where heated or cooled fluids are stored for later consumption. Controls of the future will also learn occupancy and building behaviour and automatically adjust operation to further enhance comfort levels and overall system efficiencies. The development and adoption of such systems will be driven by increasingly expensive fuel and electricity.
These systems will enter our space and gradually take over. The infiltration of complete communicating systems will result in price reductions making them more affordable. At that point, we cannot afford not to have them.
Mike Miller is past chair of the Canadian Hydronics Council and director of sales, building services Canada with Taco Inc. He can be reached at hydronicsmike@taco-hvac.com.