Refrigeration systems operating with saturated suction temperatures below freezing will eventually experience an accumulation of frost on the evaporator tubes and fins. The frost serves as an insulator between the heat to be transferred from the space and the refrigerant, resulting in a reduction in evaporator efficiency. Certain techniques must be employed to periodically remove this frost from the coil surface.
Refrigeration defrost methods can include, but are not limited to off cycle or air defrost and electric, which were addressed in Part I in HPAC February 2017, and gas, which will be discussed in this article. Modifications to these basic defrost schemes add yet another layer of complexity for field service personnel. When properly setup, all methods will achieve the same desired result of melting the frost accumulation. If the defrost cycle is not set up correctly, the resulting incomplete defrosts (and reduction in evaporator efficiency) can cause higher than desired temperature in the refrigerated space, refrigerant floodback or oil logging issues.

GAS DEFROST
Gas defrost uses the system’s internal energy to defrost the evaporator, utilizing the naturally occurring high temperature discharge vapour to add the necessary heat required to accomplish the defrost cycle. Through the years, refrigeration systems have employed several different methods for introducing the hot gas to the evaporator. These include: reverse cycle, three pipe and reverse flow. Each of these methods has been perfected further as different manufacturers have refined the operation to suit their needs.
Reverse Cycle: When thinking of a reverse cycle style of defrost a heat pump often comes to mind. During the normal refrigeration cycle, the system acts just like any other DX system where the condenser provides the liquid refrigerant that will feed the system TEVs. The TEVs meter refrigerant into the evaporator as required based on the load, resulting in a refrigeration effect. On systems where the evaporator saturated suction temperature is below 32F, the formation of frost will occur on the evaporator fins and tubes. This method requires a four-way reversing valve, which allows the system refrigerant flow to be reversed at the initialization of the defrost cycle. The compressor discharge vapour is now directed backwards through the evaporator, condensing the high pressure vapour into a liquid and melting the frost buildup in the process. The newly created liquid refrigerant must now be passed through an expansion device and allowed to vapourize as it passes backwards through the condenser before returning as a low pressure vapour to the compressor suction.
This method results in a faster defrost, but several design and operation precautions must be addressed. First, the system will require two expansion valves and a series of check valves to expand the liquid refrigerant in both modes successfully. On systems utilizing a refrigerant distributor, the nozzle orifice will not be of sufficient size to allow the defrost gas to flow through it without experiencing excessive pressure drop. A side outlet distributor (or standard distributor with an auxiliary side connector) must be used to allow the defrost gas to flow around the distributor nozzle. On close coupled systems with a single evaporator and no liquid receiver, a single expansion device (designed to operate for reverse flow operation) may be used to feed both the indoor and outdoor coils. In this case either a balanced port or electric expansion valve is recommended and it should be located in the common liquid line between the evaporator and condenser. Additionally, if a liquid pump down solenoid is used, it must also be designed for reverse flow operation. A special bi-flow filter drier is necessary in the common liquid line. If a suction filter is used, or if a suction filter-drier has been added during a clean-up procedure, it will need to be installed in the suction line between the reversing valve and compressor.
Three Pipe: This method of defrost is named for the addition of a distinct third pipe running between the compressor rack and the evaporator(s), that is the defrost gas supply pipe. Hot gas is taken from the compressor discharge and introduced to the inlet of the evaporator, but downstream of the TEV. Once again, we have refrigerant condensation of the defrost gas. As it flows forward through the evaporator its heat energy is transferred to the frost accumulation on the evaporator fins and tubes. This liquid has nowhere else to go other than back towards the compressor, so an adequately sized accumulator is usually required. 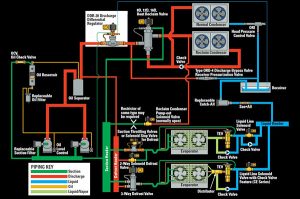 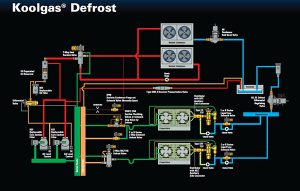 HERE IS THE PROBLEM
The liquid differential valve is sized to handle the full capacity of refrigerant liquid mass flow at the design condition. During periods when a given system is in the defrost mode, the mass flow requirement through the main liquid line will be reduced in the following ways: any system still in the refrigeration mode operating at load conditions less than the design condition will reduce the demand for liquid mass flow; the liquid refrigerant mass flow requirement for the system in the defrost mode will be zero; and the condensed discharge vapour from the system in defrost flows to the liquid header and supplies other circuits with liquid refrigerant, further reducing the mass flow requirement through the differential valve. This reduction in mass flow through the liquid line (upstream of the liquid header) in effect renders the differential valve temporarily oversized. If severe enough, the differential valve may have difficulty operating in a stable manner, yielding an erratic or low differential pressure across its port.
In summertime conditions it is easy to see that there is plenty of discharge heat available to defrost an entire store. Discharge temperatures will naturally rise with the rise in summertime ambient temperatures. This extra heat content, which would have otherwise been rejected to the outside environment, is now available to facilitate the defrost cycle. Wintertime conditions pose a dilemma for systems using gas defrost. For air cooled units, lower ambient temperatures automatically result in a lower head pressure, lower compression ratio and higher compressor efficiency.
So, it is logical that these systems should be set up to operate with the operating head pressure as low as possible. However, there is a natural opposition between the desire to capture energy savings with lower head pressure, yet still have sufficient heat content available in the defrost vapour for a proper defrost. There is a lower limit to how far the head pressure can be reduced and still maintain sufficient heat content in the defrost vapour for an adequate and timely defrost cycle. This will typically be higher than the minimum allowable head pressure during the refrigeration cycle, particularly if the system does not utilize heat reclaim and employs electric expansion valves (EEVs).
While gas defrost eliminates the expense of defrost heaters, control relays and/or contactors, the required field installed wiring and the monthly electrical expense to power the defrost heaters, it does require that the head pressure be artificially elevated to provide adequate heat content to accomplish the defrost cycle.
It could be argued that a system without a heat reclaim circuit, which also requires elevated head pressure in the lower ambient months to generate sufficient heat in the discharge vapour, and using EEVs, and utilizing electric defrost could reduce winter head pressures even further than the minimum head pressure required for proper gas defrost. This assumes that the compressor is designed accordingly. With this being the case, as the ambient falls there will come a point where the energy savings with gas defrost may be offset by the energy penalty for the required elevated head pressure.
Assuming that it is TEV sizing, not gas defrost requirements, that necessitates head pressure controls; reverse flow gas defrost does not require any additional energy consumption. Unlike a three pipe gas defrost, the liquid generated during a reverse flow defrost actually enters the liquid header and can be used to meet cooling requirements.
So, from an energy standpoint, it does not matter if discharge vapour is used to heat the ambient at the condenser or to melt ice in the evaporator. However, the discharge defrost differential valve will introduce a pressure drop resulting in higher compression ratios and added energy consumption.
It would be an interesting study to compare the energy consumption of a given supermarket utilizing electric defrost versus gas defrost (taking into account the need to maintain a minimum head pressure for adequate defrost) – perhaps as the subject of a future article.
Dave Demma holds a degree in refrigeration engineering and worked as a journeyman refrigeration technician before moving into the manufacturing sector where he regularly trains contractor and engineering groups. He can be reached at ddemma@uri.com. Co-author Bob Schindler is a regional sales manager at KeepRite Refrigeration.