Unharnessed power: Blazed trails and broken barriers mark the journey into the trades industry for women 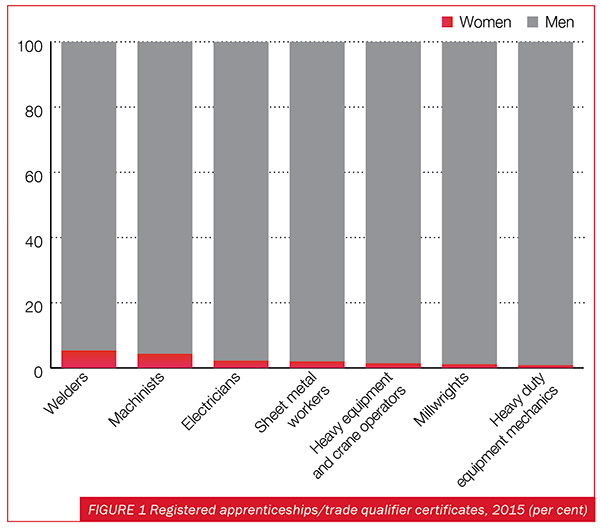 When Siân Smith presented the top nine most influential moments of her life and career, she was met eye-to-eye with 130 women – cellphones off, side conversations muted and attention to the podium. Smith was invited to be keynote speaker at the 2015 American Supply Association Women in Industry event.

The short, high-level roadshow speech she typically gave as Canadian Institute of Plumbing and Heating (CIPH) chairman was swapped for an hour-long talk on the proposed topic: Blazing Your Trail to Success.

“Who am I to talk to anybody else about blazing a trail?” Smith asked herself. She had blazed a trail, though, as the first woman to be appointed chairman of the board at CIPH. Self-perception is just one gender gap in the workforce.

In skilled trades, this is compounded with a lack of recruitment initiatives and traditional organizational practices. Limited access to informal networks and an inclination to offer opportunities to junior-level men pose obstacles for growth in any field, according to Statistics Canada.

For women who face multiple barriers to skilled trades employment, such as Indigenous women, the ability to obtain a driver’s license, secure childcare or access foundational learning support limits opportunities even further.

Despite efforts from organizations and networks help to break down barriers and challenges norms, there’s room for progress. Even more, according to CME, labour shortages pose a significant challenge for manufacturing businesses. The solution? Attract and hire more women.“There is no larger, more relatively untapped cohort in the country,” CME stated in its report.

During her time at WBF, graduate Chrissy Bell was one of three women in the organization’s Indigenous training program. She has worked for Edmonton, AB-based HVAC and plumbing company Ram Mechanical for three years.

The key, says Bell, is to offer the trades as an option to women in high school – less than 14 per cent of women in CME’s survey thought that the K-12 school system encouraged girls to pursue a career in the trades.

“I think that the decisions of the past hold us back,” says Smith. “We have a critical mass of women in administrative functions. When you look at the leadership roles, the women sort of weed themselves out.”
Smith says as women become more visible in an organization or company, other women will see that there is a career path to be had.

“For a long time, the world talked about women in the trades as non-traditional,” says Moss. “There’s an opportunity for us to start having a different type of conversation.”

In her time as chairman of the board at CIPH, Smith says she, too, wanted to make the industry a more attractive place to work for women.

Smith is the general manager at a newly-formed subsidiary of Talisker Plumbing. The master distribution company will focus on products in the finished plumbing category. She previously held the position of senior director of procurement, pricing and IT at Noble.

In October 2016, after she had completed her tenure as chair, Smith formed the CIPH Women’s Network with co-chair Barbara O’Rielly, general sales manager, water heating, at Rheem Canada in Brampton, ON.

On March 1, 2017, the network held its first live event –which sold out in the first two weeks with a wait list of 20. The event was a clear indication to Smith that women in the industry want to be “part of something bigger” and influence change.

For some women in skilled trades, change has arrived. Bell says she does not come across much hardship on the job, and she isn’t alone.

Taylor Hole, a first-year student of the Piping Foundations Program at British Columbia Institute of Technology (BCIT) in Burnaby, BC, says the real challenge is physical.

Upon completion of BCIT’s Trades Discovery Program, which allowed Hole to explore electrical, carpentry and plumbing, she went with plumbing. Her goal is to work in the province’s film industry – to create explosions, shower scenes, and rain and steam through her knowledge of pipes and sprinkler systems.

“I was mainly doing this for myself as something I wanted,” says Hole. “I didn’t really care if I was going to be the only girl or not.”

There are three other women in Hole’s class but she hopes to see a full class of women one day. WBF CEO Kathy Kimpton says the trades offer benefits for women beyond financial stability.

For Bell, the trades have offered her an opportunity to enjoy economic freedom and spend more time with her family. Her fiancé is now able to stay home with their four children.

“It’s nice to have that option to have the kids stay home with their other mom,” says Bell. “It changed my life. It changed everything.”

Smith, en-route to the American Supply Association Women in Industry Event, reconstructed her speech to share moments that shaped her career.

The final item on her list recalled criticism upon her appointment to the CIPH board of directors a decade ago. In response, Smith chose to be courageous in her career and challenge the traditional boundaries of the industry.

“I think the intensity and the drive of women in this industry is phenomenal.” says Smith. “It’s almost a hidden power that we haven’t harnessed.”