A busy agenda featuring leaders in the geothermal field attracted more than 125 industry stakeholders to the Ontario Geothermal Association (OGA) 10th Anuual Conference on April 3 and 4.

There was a positive vibe at OGA’s 10th conference-starting with the record attendance at more than 125.

A recurring theme in the speaker program was modeling geothermal systems after the utility model. In his discussion on district systems Brian Urlaub of MEP Associates Inc. noted that “it is really no different from a typical utility model.” He reviewed design practices describing two options in detail. Option one with a central heat exchanger involves large pumps, pipes and flow. Urlaub noted that “resiliency may be a concern” with the two-pipe system, whereas the distributed heat exchanger with a one-pipe distribution system has built-in resiliency and redundancy.

With the distributed geothermal HX one-pipe system multiple pumps are housed in a vault underground resolving a recurring issue with geothermal–that is the space it requires. “Wouldn’t it be ideal if geothermal didn’t take greenspace?” mused Urlaub. 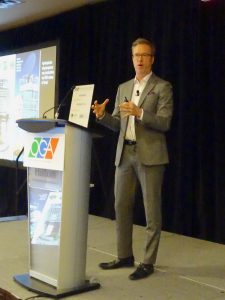 “We all talk about integration but the geothermal guy comes in at the end,” said Andrew Bowerbank of WSP noting that despite all the conversations today about integrated design, it is not necessarily happening.

Freeing up real estate is what will open up the multi-family residential and commercial building market to geothermal according to Tim Weber, cofounder of Diverso Energy. He suggested that without the rooftop units developers can add roof spaces, which they can develop and sell. “We go to the architects because they need a solution and we have it,” said Weber. Diverso offers a third-party ownership solution whose main market is small to mid-size developers. Weber expects that with Toronto’s new rules “large developers will have to look at geo soon.”

Fernando Carou, who is with City of Toronto Environment and Energy Division, provided an update on developments with the Toronto Green Standard – A roadmap to carbon-free buildings in the city by 2030. The Toronto Green Standard Version 3 was revised to become more demanding every four years with the ultimate goal to achieve zero carbon buildings by 2030. Buildings must now be 25 per cent more energy efficient than the national code. Standard envelope and standard mechanical systems are expected to fall short of this target, forcing developers to look at alternative technologies, including geothermal.

Andrew Bowerbank of WSP agreed “You can’t rely on these… governments will only do things when they see things are already happening.”

Jamie Hulan, director of Equipment Division, OEE, NRCan noted that “rebates are certainly politically polarizing” and suggested that “we could come up with a list of best practices so if a jurisdiction wants to start a [incentive] program we can say ‘there is a guide.’”

Panel member Ryan Dougherty from GEO in the U.S. agreed as he recounted the “crash” of 2017. 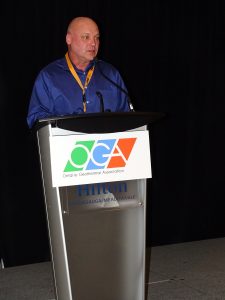 Stanley Reitsma addresses the crowd at the Hilton in Mississauga, ON. Reitsma was named president of the Ontario Geothermal Association (OGA) at its Board of Directors meeting in December. He is a long time member of the OGA Board, has been CEO of GeoSource Energy for 15 years. Reitsma holds a PhD in Civil Engineering from Queen’s University, and a Master’s degree in Geotechnical and Geoenvironmental Engineering from University of Waterloo.

“This is the insanity of incentives and tax credits, great to have but when they get taken away…”

Moving forward Jeff Ranson of CaGBC suggested that the most important thing to do is “to create demand, consumer demand. There is no single magic bullet—sustained activity in a bunch of different areas.

“If there is no coalition of people pushing this, it is not going to happen,” asserted Ranson.

Want to find out more?

Paving the Road to 2030 and Beyond: Market transformation road map for energy efficient equipment in the building is available at www.nrcan.gc.ca/sites/www.nrcan.gc.ca/files/emmc/pdf/2018/en/18-00072-nrcan-road-map-eng.pdf