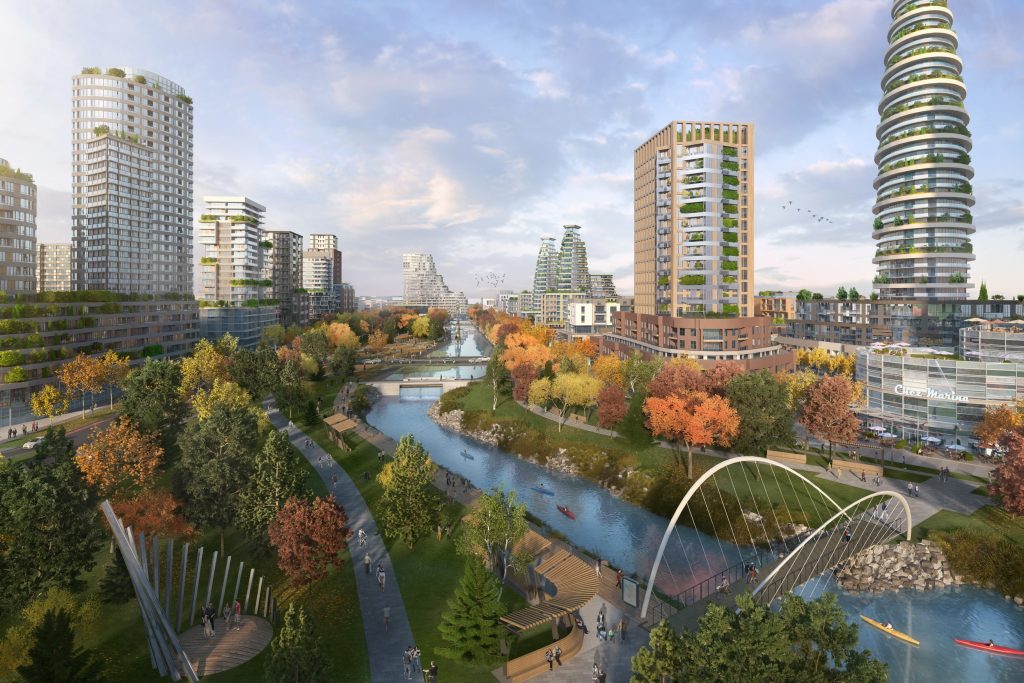 A rendering of the proposed community.

Just off the shore of Lake Ontario, demolition machines chip away at the extensive concrete foundations that once rested beneath a massive coal-fired power plant.

The arduous work is part of an ambitious plan by a consortium of developers to transform the 177-acre brownfield site in Mississauga, ON into Lakeview Village, a net-zero, mixed-use community overlooking the waterfront.

Over the next 10 to 15 years, the largely untapped piece of land will become a sweeping construction site for residential, commercial and institutional structures backdropping a 600-metre pier.

Scott, along with Brian Sutherland, director of development at Argo Development, and Fabio Mazzocco, president of land development, and Albert Bicol, owner of Alberto Bicol Consulting Inc., presented an overview of the project at The Buildings Show in Toronto, ON.

The developers hope to create community equipped with a plethora of “green” features, such as permeable paving, rooftop solar systems, natural ventilation and roof rainwater reuse. Implementation of a district renewable energy system and Passive House design are also key parts of the plan.

“We have an RFP out for some of the world’s leading district energy providers and we’re actually just kind of going through that now,” Mazzocco said. “We have to narrow it down and pick one to work with.”

“The region was promoting that we would use the effluent coming off the site. We can redirect that into the district energy plant and strip heat off of that and use it for heating and cooling,” Mazzocco said. “That’s one big piece of infrastructure from the energy side.”

The consortium recently submitted it’s Master Plan to the City of Mississauga, and aims to have it endorsed by council in January 2019 so that construction on the first phase can begin in 2020.

“It’s going to take the municipality and everybody working together, thinking a little outside the box. Which, typically, it’s hard for the municipalities to do that but they seem capable. These new ideas take some time,” Mazzocco said. “Having said that, Mississauga is getting more and more progressive and they see the benefit here and they really want this community to be a priority.” www.lakeviewcommunitypartners.com