Jacques joined Deschênes & Fils Ltée in 1954, was president/CEO of Groupe Deschênes from 1988 to 2000, and he continued to serve on the Board until their most recent meeting in December 2021. 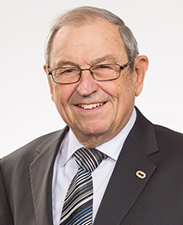 With sadness, brothers Martin and François Deschênes released a statement announcing the death of their father Jacques Deschênes, who passed away peacefully in his residence in Sainte-Marguerite-du-Lac-Masson on January 14, 2022, at the age of 86.

Jacques joined Deschênes & Fils Ltée in 1954 and held various roles before becoming its third president and general manager in 1973.

He then served as president and CEO of Groupe Deschênes Inc. from 1988 to 2000. Under his leadership the company grew from a single location in Montreal to 50 in Quebec and Ontario.

Jacques laid the foundations that still shapes the organization. He was Chairman of the Board of Directors of Groupe Deschênes until 2009 and continued to serve on the Board as Honorary Chairman until their most recent meeting in December 2021.

In their statement, Martin (currently vice president of the Board) and François (president and CEO), described their father as, “A man of principle and determination, he was a philanthropist, a generous volunteer of his time, a builder, an accomplished entrepreneur and an undeniable promoter of the sustainability of family businesses. He was also a great nature lover.

“He marked more than one with his anecdotes, his joie de vivre, his loyalty, his generosity and his sense of humour. Despite all the accomplishments he was able to achieve, humility and simplicity will remain among his greatest qualities.”