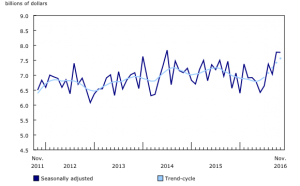 Total value of permits Note(s): The higher variability associated with the trend-cycle estimates is indicated with a dotted line on the chart for the current reference month and the three previous months. For more information, see note to readers.
Source(s): CANSIM table 026-0010.

According to the January 10, 2017 issue of The Daily, municipalities issued $7.8 billion worth of building permits in November, down 0.1 per cent from the previous month. The decline was largely the result of lower construction intentions in Alberta, following a spike the previous month due to impending changes to the Alberta Building Code.

In the residential sector, the value of building permits fell 1.6 per cent to $5.1 billion in November, following three consecutive monthly increases. Declines were posted in four provinces, led by Alberta. The largest gains were posted in British Columbia and Quebec.

The value of non-residential building permits rose 3.0 per cent to $2.6 billion in November, the fourth increase in five months. Higher construction intentions were registered in five provinces, led by Quebec and Ontario. The largest decline was reported in Alberta.

In the single-family dwelling component, municipalities issued $2.8 billion worth of permits in November, down 2.0 per cent from October. The decline in Alberta was large enough to offset gains in seven provinces.

The value of permits for multi-family dwellings fell 1.0 per cent to $2.4 billion in November, following four consecutive monthly increases. Declines were reported in six provinces. Lower construction intentions in Alberta and Ontario were mainly responsible for the decrease.

Municipalities approved the construction of 19,498 new dwellings in November, up 0.5 per cent from the previous month. The increase was attributable to multi-family dwellings, which rose 3.3 per cent to 13,035 new units. Conversely, single-family homes fell 4.8 per cent to 6,463 new units.

The value of industrial permits rose 10.1 per cent to $404 million in November, a second consecutive monthly increase. The advance was mainly attributable to higher construction intentions for primary industry buildings, manufacturing plants and maintenance facilities. Gains were posted in six provinces, most notably Quebec.

In the commercial component, the value of building permits was down 6.1 per cent to $1.5 billion in November. Lower construction intentions for hotels, office buildings and retail complexes contributed to the drop. Declines were reported in five provinces, led by Alberta.