Canadian building permit values rise to $8.7 B in December

The total value of building permits in Canada has climbed 7.4 per cent, up to $8.7 billion in December 2019.

According to a report published by Statistics Canada, increases were reported in five provinces with Ontario and Quebec leading the way with 10.5 per cent and 15.8 per cent increases respectively.

The total value of permits for multi-family dwellings was up 15.9 per cent to $2.9 billion in December, mostly due to large projects in the census metropolitan areas (CMAs) of Montreal and Vancouver. 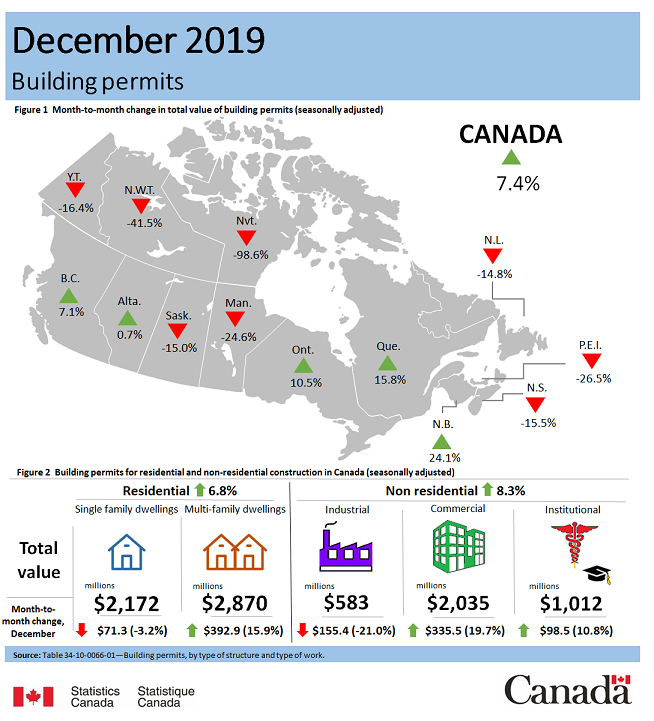 In Montreal, the value of commercial permits rose 19.7 per cent to $2 billion in December. This is largely due to plans for the carbon-neutral “Royalmount” multi-use commercial development.

Meanwhile, the value of institutional permits rose to its highest level since September 2017 (+10.8 per cent to $1 billion). This is largely due to permits for the redevelopment of the Centre for Addiction and Mental Health (CAMH) in Toronto.

Conversely, the total value of permits for single-family dwellings has decreased by 3.2 per cent, down to $2.2 billion, with the largest decline being in Ontario (-$76 million). The total value of industrial permits has also declined by 21 per cent to $583 million, following strong gains in November.