Habitat gets a helping hand from former U.S. president 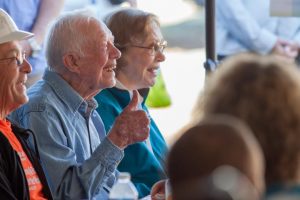 President Carter was admitted briefly to St. Boniface General Hospital for rehydration but returned to the Winnipeg work site on Friday, July 14.

Thousands of volunteers joined Habitat for Humanity’s 34th Jimmy & Rosalynn Carter Work Project in Canada to build 150 homes in celebration of Canada’s 150th anniversary. Former U.S. President Jimmy Carter and former first lady Rosalynn Carter built alongside future homeowners in Edmonton, AB and Winnipeg, MB, with additional projects taking place in communities across the country. The first day of building kicked off July 10 and continued through July 14. Projects during the week included: 75 homes in Edmonton and Fort Saskatchewan, 25 homes in Winnipeg and 50 homes in territories and provinces across Canada.
“Rosalynn and I are pleased to be bringing together volunteers to build alongside families during this year’s Carter Work Project,” said President Carter. “Housing affordability in Canada is at an all-time low. We are proud supporters of Habitat for Humanity and grateful to everyone who is joining us in our efforts to bring affordable housing to families across the country.”
Achieving access to an affordable home is increasingly difficult for many Canadians, with 91 per cent saying high costs are the biggest barrier to homeownership, according to a recent survey by PSB conducted on behalf of Habitat for Humanity. Additionally, 1 in 7 Canadian households, including 735,000 children, are in core housing need, according to data from the Canada Mortgage and Housing Corporation – meaning that too many families do not have a safe, decent, affordable place to call home.
“The homes we are building in Canada will bring much needed stability to so many families,” says Mark Rodgers, president and CEO of Habitat for Humanity Canada. “We are thrilled to be welcoming President and Mrs. Carter to Canada and to see so many communities across the country coming together during this one week to help empower families through affordable homeownership.”
“A stable home can unlock infinite possibilities for families,” said Jonathan Reckford, CEO of Habitat for Humanity International. “We are grateful to the many volunteers and sponsors and especially to President and Mrs. Carter for being a voice for affordable housing and working with future homeowners who are building better lives for themselves and their families.”
Since 1984, President and Mrs. Carter have traveled around the world with Habitat, donating their time and voices annually to build and improve homes and raise awareness of the critical need for decent and affordable housing. Inspiring millions over the last three decades, President and Mrs. Carter have worked alongside nearly 100,000 volunteers in 14 countries to build, renovate and repair more than 4,000 homes.
Country music stars Garth Brooks and Trisha Yearwood also lent their hands in Edmonton. Brooks and Yearwood, who along with the Carters were named inaugural Habitat Humanitarians, have volunteered their time, skills and voices to Habitat since 2007. In Winnipeg, long-time Habitat Canada supporter and HGTV star Scott McGillivray will be building homes with volunteers during the week.
Supporters of the 34th Jimmy & Rosalynn Carter Work Project included: City of Edmonton; City of Fort Saskatchewan; Province of Alberta; Province of Manitoba – Manitoba Housing; Dow Chemical Company; Hunter Douglas Canada; Lafarge; Manitoba Liquor and Lotteries; The Rossy Family Foundation; CGC; Edmonton Oilers Community Foundation; Floform; The Home Depot; Kristie Charitable Foundation; Lowe’s; Nissan Canada Foundation; Owens Corning; Qualico; Schneider Electric; Stanley Black & Decker; Stantec; TELUS; and Wall Grain.


Related Stories
Third RIDE FOR HABITAT set for July 21, 2012
Ride for Habitat on the radar
Start your engines for the BC Ride for Habitat
SBD employees participate in Habitat build