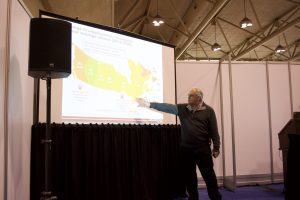 According to Collins, all research indicates that residential development should slow but it continues to grow across Canada.

Bob Collins, senior economist with BuildForce Canada, kicked off the Canadian Mechanical and Plumbing Exposition (CMPX) with a construction and maintenance forecast.

Collins said that on a national scale, the labour market has plateaued, but 2017 was a record year. Provinces that experienced periods of growth, such as Manitoba and Saskatchewan, have slowed down.

In Alberta, the focus will be on maintaining the buildings developed during the last 20 years. The province will experience a labour shortage, and may need to hire temporary foreign workers.

Collins said demographic challenges Canada, namely an aging workforce, cannot be reversed. This problem is most prominent in Atlantic Canada, where workers will need to come from out of province.

Investment in residential and non-residential construction is on a steady path upward, said Collins – and it is spreading outside of the Greater Toronto Area (GTA) to Northern Ontario. However, the GTA remains the strongest centre for growth in Canada in the near term.

CMPX 2018 brought the industry together in March for a loaded three-day event at the 200,000 square foot Metro Toronto Convention Centre in Toronto, ON. www.cmpx.ca