This study is said to serve as an important baseline for understanding the impacts of the COVID-19 pandemic on apprentices as they undergo or complete their training. 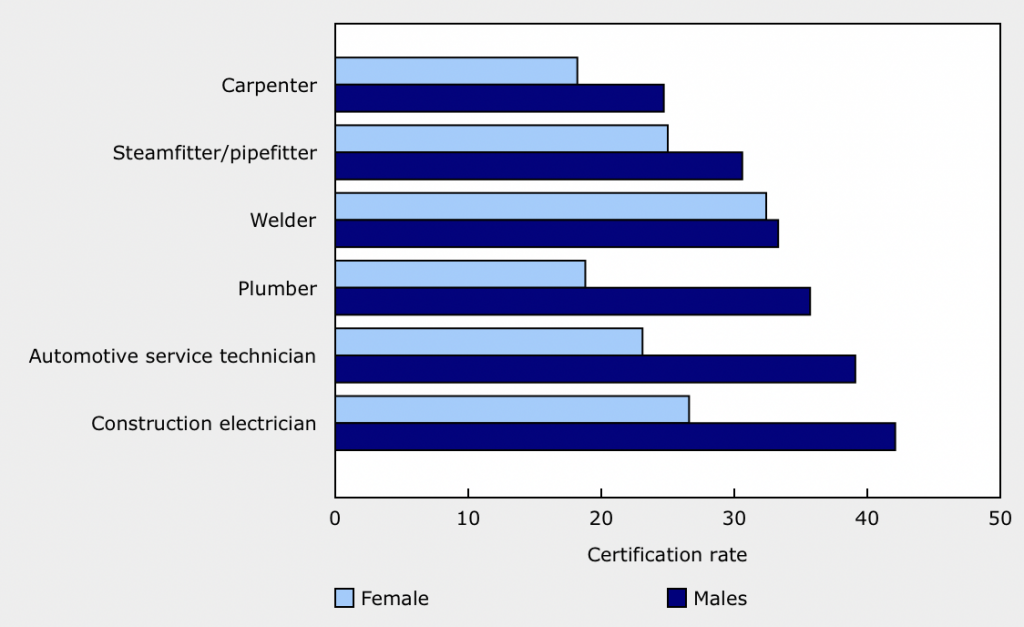 Statistics Canada has announced a new study looking at certification rates for apprentices who began their training in 2013 and where they were in 2019, six years into the program. In 2013, plumbing saw some of the highest number of registrations for the percentage of females certifying in predominately male trades. In 2019, six years after registration, those numbers decreased sourced to a lack of representation.

This study is said to serve as an important baseline for understanding the impacts of the COVID-19 pandemic on apprentices as they undergo or complete their training.

Many apprentices are expected to take longer than the program duration to certify in their trade. Certifications and discontinuation rates among registered apprentices vary widely by trade and are influenced by many factors, such as age, previous apprenticeship training, type of trade and whether certifications are mandatory to work in the trade.

In 2019, six years after registering in their program, certification rates were highest among Red Seal trades, including powerline technician (62.1%), industrial mechanic (millwright) (50.5%), agricultural equipment technician (47.8%) and truck and transport mechanic (47.3%).

Apprenticeships are especially vulnerable to economic fluctuations, since most training requirements are dependent upon the completion of on-the-job hours.

The study also states apprentices who were undergoing training or close to certifying in the trades may have faced a number of obstacles in their technical training and in the labour market because of the COVID-19 pandemic. These challenges included the cancellation or delay of training, as many ministries of training and educational institutions closed across Canada. Some may have also faced lay-offs or the loss of on-the-job hours, the latter being a major requirement for certification, as unemployment increased and economic conditions worsened because of the pandemic.

Information provided says the COVID-19 pandemic may have had an impact on registrations and certifications in the trades in 2020. Preliminary registered apprenticeship data show that registrations fell by 43.0%, while certifications declined by almost half (-48.7%) during eight months of 2020, compared with the same period in 2019.

This situation could increase already high concerns about a potential shortage of certified tradespeople in Canada.