How Montreal Made Ammonia Safe for Its Rinks

The city has transitioned arenas away from R-22 using a design that ensures the safety of staff, patrons and surrounding neighbourhoods. 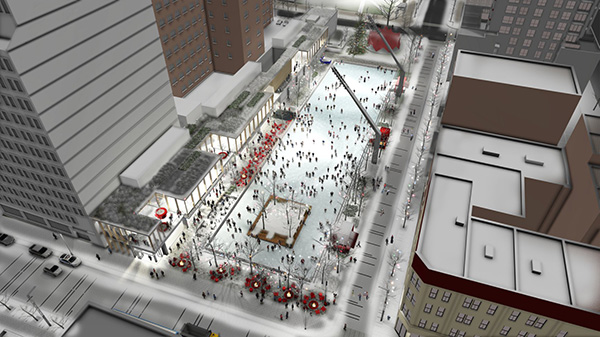 Rendering of Esplanade Tranquille in the heart of downtown Montreal, the City’s latest outdoor ice rink project which is nearing completion. (DesignMontreal)

Montreal is the second-largest city in Canada, and when it comes to ice arenas, the city stands out, now counting over 50 refrigerated indoor and outdoor facilities. Montreal is also the birthplace of the Montreal Protocol on Substances that Deplete the Ozone Layer (1987), the international treaty to phase out man-made ozone depleting substances, an agreement that continues to make an impact on the refrigeration industry, including arenas.

For two decades before the Montreal Protocol was signed, the bulk of arenas were built with refrigeration plants employing R-22, a non-flammable and non-toxic refrigerant. Unfortunately, it was found to be an active contributor to the growing hole in the ozone layer.

Montreal committed to converting its ice arenas away from R-22 by 2020, and that task was charged to Claude Dumas, P.Eng., a mechanical engineer working for the city. “Approaching a project, I always wear two hats: the hat of an engineer and the hat of an owner,” says Dumas.

He was a good choice for the job. After graduating in 1966 from the Polytechnique Montreal, Dumas spent 15 years working as a technical representative for two different manufacturers, Carrier then York, and then he spent eight years as a consulting engineer for the largest engineering firm in Quebec at the time, TECSULT, which later merged with AECOM, where he worked on energy efficiency projects for Montreal’s arenas, among other projects. When the city advertised for a project lead, facilities, Dumas was quick to apply. He’s been there ever since.

In replacing the R-22 in existing arenas Montreal wanted a safe, efficient, refrigeration system with a design that could be replicated. Those requirements may sound evident, but developing a replicable solution was not.

In 2005, when the project began, ammonia was becoming the refrigerant of choice. Although having the lowest possible rating for its ozone depletion (ODP) and global warming potential (GWP), ammonia is a dangerous, caustic chemical which can hurt and kill. An ice plant requiring 5,000 lbs (2258 kg) of ammonia was far from acceptable.

Jean-Paul Lacoursière, another 1966 Polytechnique mechanical grad and now a chemical engineering professor and risk management expert at the University of Sherbrooke, was recruited to assist with the project. Both Dumas and Lacoursière were aware of how dangerous ammonia could be. They were teenagers when an explosion caused by an ammonia tank ripped apart the Molson Brewery at Montreal’s waterfront in 1956, killing its 32-year-old chief night brewer and injuring two others.

Their challenge: how could they lower the risk of an ammonia leak, and how small of an ammonia inventory could it carry? It took three re-designs to get the charge down to 250 lbs (115 kg). In 2006, it was approved, and the team began to implement the design at a rate of four arenas per year.

By 2010, with half a dozen retrofits completed, the team found the standardized design could be improved, bringing the ammonia charge down to 175 lbs, and bringing the condenser inside so all ammonia was isolated in the mechanical room.

Since 2010, Montreal has used a similar design for retrofits and new builds. Here’s how the city made ammonia safe for its rinks: 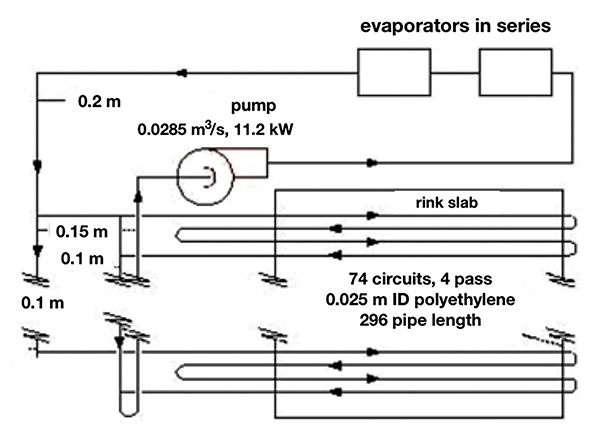 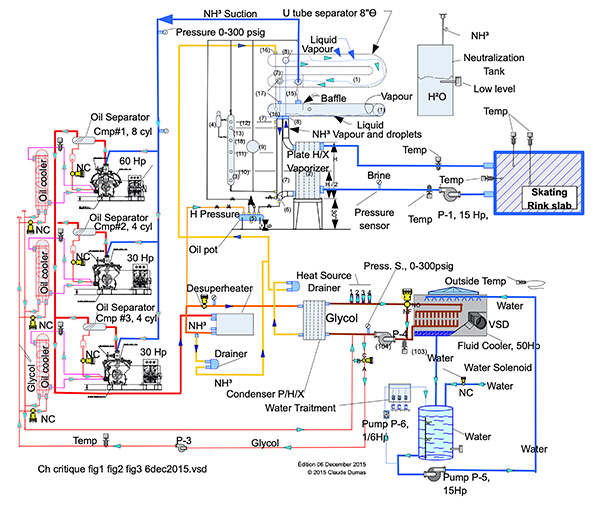 Montreal recently completed its final R-22 conversion and continues to use its 2010 design for new builds. In January, as is his custom, Dumas was on site for the pouring of the city’s latest outdoor project, the Esplanade Tranquille in the heart of downtown.

Envisioned as an urban terrace in the summer, it will become a skating surface in the winter. The near Olympic-sized rink will be supported by a 9-in. slab, accounting for the heavy summer foot-traffic. Petropoulos, Bomis & Assoc. is the refrigeration engineer and LS Refrigeration is the sub-contractor.

For the Esplanade Tranquille, the refrigeration system is comprised of: 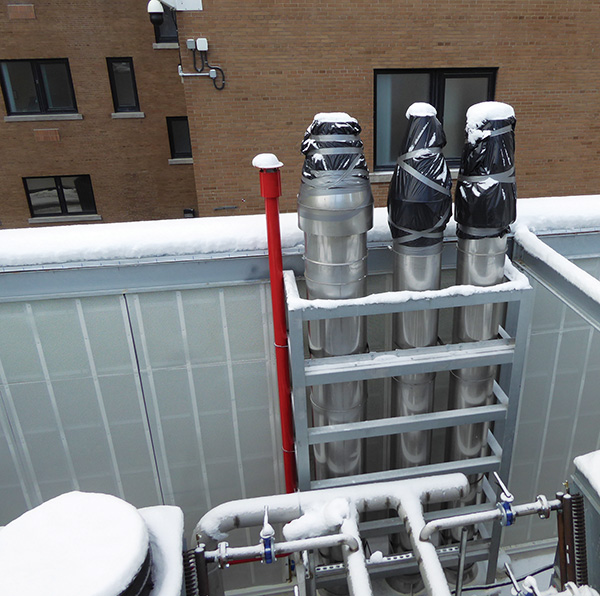 Esplanade Tranquile: The red vent is for the ammonia relief system. The three chimneys correspond to the three ventilation systems in the Class T machinery room. The large one is for heat ventilation, middle is for the min. ventilation as per CSA B-52 and the third is for evacuation of the air washer in case of an ammonia leak. Note the acceleration cone: the air will be propulsed vertically, at high speed. Also evident is how close the neighbours are, so safety is paramount. (photo courtesy Claude Dumas)

The mechanical room is built on two levels, where the main floor is 12 ft. lower than the rink, with a mezzanine, control room and access, located at ground elevation. 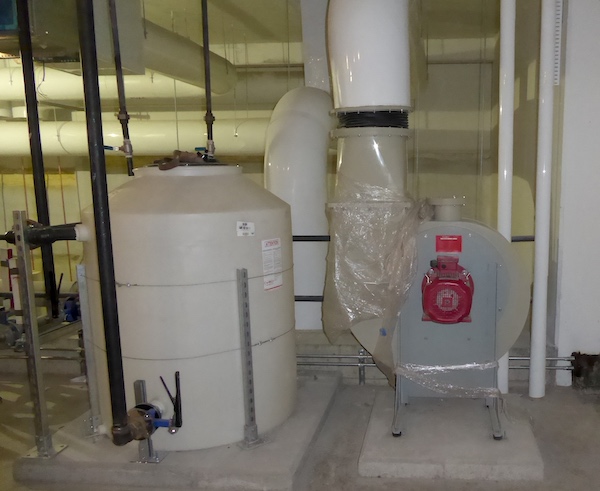 In the mechanical room, the big reservoir (left) is the expansion tank for the brine system. Next to it is the fan, which will work in conjunction with the air washer to clean the air in case of an ammonia leak. Both the fan and air washer are of plastic construction for corrosion resistance. All made in Montreal by Cy-Bo.
(photo courtesy of Claude Dumas) 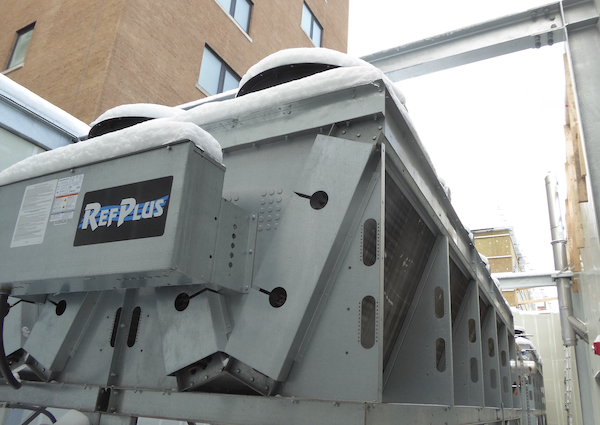 The air-cooled heat rejection device at Esplanade Tranquille. Ethylene glycol carries the heat away from the condenser and brings it to this dry cooler. A dry cooler can be used because the outdoor skating rink will only operate in the winter.
(photo courtesy of Claude Dumas)

Reference:
Claude Dumas has created a reference website for informational purposes focused specifically on the topic of ammonia refrigeration for ice rinks including technical reports and links visit: claude-dumas-nh3.ca

Colleen O’Shea has been writing about and selling energy-efficient products for indoor ice arenas for the past five years. She is the president of Greener Arena Solutions Inc., and publisher of Re-Surfacing.com.