The City of Lougheed multi-tower condo project is being constructed around an existing shopping mall. 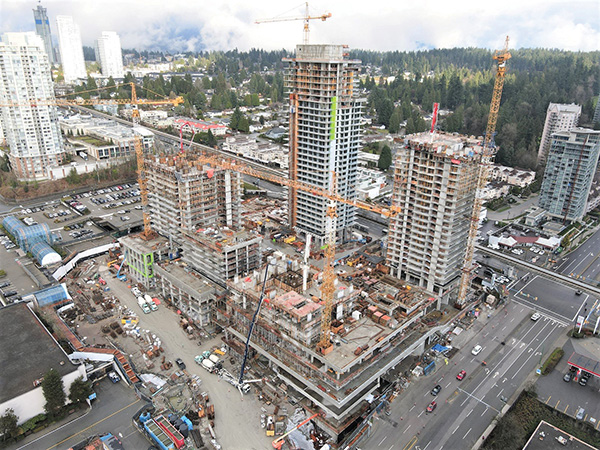 Time is of the essence on a construction project, and when it’s a large multi-tower development, small time savings really add up.

That’s what Pitt Meadows Plumbing from Maple Ridge, B.C. is experiencing with the use of press fittings, of up to 4-in., on a mega-project that includes four towers—56, 48, 37 and 30 stories tall—all being built atop a 1.5-million-sq.-ft. parkade and commercial podium in Burnaby, B.C.

The City of Lougheed multi-tower condo project is being constructed around an existing shopping mall, the Lougheed Town Centre, Still ongoing, Pitt Meadows was awarded the mechanical contract in 2018.

By pressing the fittings, Pitt Meadows didn’t need to bring a welder into each high-rise building to construct the gas riser and saved time in the process.

“We chose Viega MegaPress and ProPress at our City of Lougheed project largely due to the ease of installation and the associated labor savings,” said Austin Wilson, project manager for Pitt Meadows. 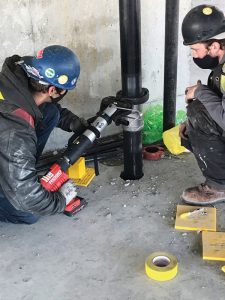 Upward of 10,000 press fittings will be used on this massive project.

“Using MegaPressG on-site eliminates the need to bring a welder to connect the main gas riser to each floor of each tower, and this saves our crews a ton of time. We can press 10 floors of couplings in the time it would take to weld one floor.”

Throughout the condo towers, Pitt Meadows used steel pipe on the hydronic heating system, ranging from ½-in. to 4-in., plus gas lines and copper lines in the same range of diameters.

The hydronic system consists of chillers and a cooling tower, as well as boilers, located on the roof of each tower. Branching off the main gas riser to each distribution zone, crews used MegaPress fittings as well as traditional joining methods for parts that were prefabricated off-site. Branches off the main to each suite used MegaPress fittings as well.

“We have a 4-in. gas main serving the rooftop mechanical rooms, which we connected with MegaPressG,” Wilson said. “The gas distributes both at the top and bottom of each building. We used MegaPress tees on the riser to supply gas to each suite. We also have some horizontal gas mains, which we pressed together on-site with MegaPress fittings, rather than bringing a welder to the site.”

This large project includes a lot of piping and fittings. That’s why the crew prepared as much as possible off-site.

“We prefabricate mostly all pipes with fittings above two inches,” said Wilson. “We try to reduce the number of joints made on-site.”

They use fittings on distribution pipe for the on-site connections of steel pipes, while the majority of the fittings are being used for the in-suite steel hydronic risers, as well as the horizontal distribution mains. Wilson says this project, in total, will use well upward of 10,000 press fittings.

About 65 Pitt Meadows crew members have been on-site since the project started, and the company estimates completion will be in early 2023.

This article was provided courtesy of Viega.