Get HVAC systems off to a good start 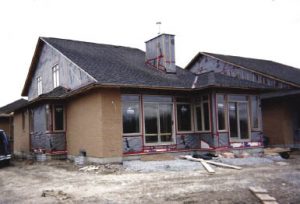 This is the time to perform a Stage 1 HVAC commissioning or TAB process. The building is fully enclosed, all the partitions are built, just waiting for drywall. Any system errors or inefficiencies can be corrected more easily now.

Whether it is a Canadian general election or a U.S. presidential contest, there always seems to be one candidate will promise to stimulate the economy by cutting taxes, relaxing regulations, eliminating red tape, and reducing the size of government. This sounds like a great election platform but I doubt any politician can do much to reduce the reach of government.

As it is, HVAC contractors are seriously constrained by the onerous task of satisfying existing government regulations. The paperwork alone requires a staff member dedicated to the task of dealing with HST, payroll taxes, incentive programs, workers compensation, WHIMIS, and other federal/provincial/municipal rules and regulations; not to mention manufacturer warranties and extended warranties. Every month a considerable sales effort must be dedicated to generating the income needed to pay for this administrative overhead.

The last thing I would ever want to do is to advocate that more regulation and reporting tasks be thrown at HVAC contractors. But something must be done to ensure residential HVAC systems are meeting manufacturers’ specifications. Considering that the automotive industry could be forced into providing tire pressure monitoring into all new cars because driving with low tire pressure wastes fuel, making sure a 97.7 per cent AFUE furnace is operating in the proper temperature rise range should be a piece of cake.

One of the most impressive prescriptive documents ever compiled in our country has to be the National Building Code of Canada along with variations designed for each province and territory. With input from scientists, engineers, architects, utilities, builders, technicians and administrators, the building code is regularly updated and improved so that Canadians never have to worry about the safety of their professionally built home.

Watching the Rio Olympic Games last summer I was interested to see the number of reports coming from the various favelas surrounding the Olympic site. Originally designated as squatter sites for returning Brazilian soldiers in the late 19th century, the favelas later grew into shantytowns because of inadequate housing for the countless poor people crowding into urban areas. Thus, a favela results in the absence of a building code or any public policies dedicated to housing the poor.

Although our building code provides for only minimum standards, there is nothing to prevent a builder from using better materials or superior methods as noted by several popular television builder-personalities. Make “better than code” your personal mantra.

Our building code has had several iterations over the years as construction technology improved and better practices were adopted. Indeed, the recent addition of the Supplementary Standard SB-12 to the Ontario building code moved it beyond constructing safe buildings into the realm of energy efficiency, which was virtually ignored in previous editions.

Remembering that an HVAC system consists of two discrete components: one, the device that makes heat or removes heat and two, the distribution system for said heat, it is curious that the building code (at least in Ontario) does not really have much to say about how those things should work together. True, manufacturers’ instructions must be followed, ducts must be placed just so, clearances to combustible materials are defined, but there is nothing said about a completed systems’ performance with respect to its design criteria. There is no requirement to commission a residential system in its entirety. In addition, as far as I know, there is no requirement to demonstrate compliance with any municipally-approved heating plan.

As residential subdivisions started spreading out far and wide from city centres, municipalities were slow in requiring heating permits to be taken for new residential HVAC. I saw many a heating plan drawn on a piece of cardboard that included a bill of materials written on scrap 2 x 4. Some of those systems actually worked. Once municipalities began demanding heating permits, contractor heating plans had to be approved and systems inspected for compliance. Yet, even with approved plans stamped and inspections done, the poor performance of many two-storey, brick veneer tract housing heating systems is scandalous.

Typically, yesteryear commissioning consisted of the builder calling the gas utility for a “turn-on” once the furnace was installed. A utility technician would come to the site, do the required tests, examine the piping and venting for gas code compliance, hang a gas meter and then start the system. The tech would test the furnace limit and check for proper operation and that was it: commissioned. Very few systems were ever tested to see if the 4″ x 10″ register in the master bedroom was flowing 85 cfm (for example) as dictated by the approved plan.

Many times and often, the newly fired gas furnace would be used as a construction heater causing ruinous damage, which resulted in premature product failure. A human comfort heating system of any kind must not be used for construction heating or cooling.

Ideally, air handler operation must be avoided until “carpet stage”. Builders should use other methods of temporary space heating such as a natural gas radiant heater.

HVAC manufacturers now require that warranties be registered and to qualify for warranty registration, the system must consist of AHRI rated components. The evaporator coil, for example, can be a third party product, but it must be AHRI rated for use with the outdoor unit. If the AHRI certificate says a particular combination of equipment achieves 16 SEER at 1000 cfm, then the duct system must be capable of moving the rated airflow. Sometimes, the gas furnace or air handler will require more airflow in heating mode, so the system designer needs to pay attention to absolute airflow requirements.

I have been on so many jobs where a thorough cleaning of the blower wheel combined with a “lick and a promise” system balance (what can you do without the heating plan?) improved the system to the point where the customer said, “Wow, there’s never been that much airflow out of the master bedroom register before!” Why wasn’t that deficiency caught at start-up?

I recently watched a video produced by the State of New York in which it was announced that blower door testing would become mandatory for all residential construction in the State of New York starting in October 2016. The video presentation suggests that a preliminary test be done before boarding so that leaks can be sealed more easily without having to tear anything down in the event of a failed test. This should be a best practice for the HVAC system too.

Consider this idea for a multi-tiered commissioning program. Tier One Commissioning: Prior to boarding, with all the windows, doors, and insulation installed including air sealing, further construction should be halted allowing for the air handling system to be started under reasonably clean conditions. Using a summary of the approved heating plan, each outlet should be tested with a properly calibrated air hood or air flow meter to verify the specified volume of air is flowing to each outlet. Create a temporary box at each return air opening with a suitable grille so that Tier One testing resembles actual operating conditions. Underperforming supply or return problems can be repaired at this time, while the interior of the building is completely open.

Tier Two happens once the building reaches “carpet stage,” in other words, it is clean enough to start the air handling device or furnace without damaging construction debris or low return air temperatures sucking the life out of very expensive equipment. At Tier Two an airflow check must again be completed with all grilles and registers installed.

Depending on the season, the HVAC equipment is to be started and should include documentation of start-up performance data. Assuming a furnace start-up, details such as incoming voltage, total amps, motor amps, flame rod microamps, gas pressure (static, working and manifold), gas input (clocking the meter), temperature rise, external static pressure, and any other manufacturer suggested testing should be completed and documented. All Tier Two commissioning data must become part of the on-going system documentation creating a system health record readily available to service technicians on future maintenance or service calls.

Tier Three commissioning is really Tier Two–Part 2 in that a second call to the newly-installed system must be completed in the appropriate season of the year. If a system is commissioned in the heating mode, a cooling commissioning should be done when conditions are suitable. Some manufacturers say a minimum outdoor temperature of 65F along with an indoor temperature between 70F and 80F is required before a cooling system may be commissioned – be sure to follow the manufacturer’s recommendations. Since airflow has already been confirmed earlier, it should be a matter of taking and recording data such as: air temperature entering the outdoor coil (DB); air temperature entering the indoor coil (WB & DB); air temperature leaving the indoor coil (WB & DB); suction pressure; suction line temperature; head pressure; liquid line temperature; superheat and subcooling. HRV/ERV balancing data must also be part of the process.

To quote former U.S. president Ronald Reagan, we should trust the hard baked science that is the foundation of our industry. It provides us with the tools needed to produce efficient and comfortable HVAC systems. However, we must verify that the expected performance of equipment and systems actually exists at every start-up. Large commercial buildings are commissioned using a set of procedural standards as developed by the National Environmental Balancing Bureau (NEBB). NEBB procedural standards pertain to fume hoods, clean rooms, sound and vibration, whole building technical commissioning and to, specifically, Testing, Adjusting, and Balancing of Environmental Systems (TAB). Only certified TAB technicians from third party certified firms are allowed to commission such systems. It is time for TAB commissioning to be incorporated into the building code as a requirement for residential buildings too. In my view, residential new construction, residential renovations, and residential retrofits involving government rebate money must be TAB certified.

Such changes are always uncomfortable and inevitably lead to more costs: who is going to pay? Builders will say our production schedules cannot be interrupted like this. Contractors cannot afford such lengthy testing; pricing a commissioning cost into bids will make them uncompetitive. The short answer is this: the end user typically pays although municipal, provincial and federal governments should help by diverting rebate funds into commissioning costs. Home builders and utilities should also offer to defray some of the TAB commissioning cost.

WASTE NOT, WANT NOT

The old proverb waste not, want not means one should use resources carefully so that he won’t be in future need. Considering a conventional residential building consumes a large amount of energy when it is operating near perfection, how can our industry reconcile not tweaking a newly hatched building to be the best it can be? And recording the TAB results for posterity? Let’s get residential commissioning into the building code as soon as possible.

Ian McTeer is an HVAC consultant with 35 years experience in the industry. He was most recently a field rep for Trane Canada DSO. McTeer is a refrigeration mechanic and Class 1 Gas technician