Modifications to basic defrost schemes add yet another layer of complexity for field service personnel.

It is inevitable that refrigeration systems operating with saturated suction temperatures below freezing will eventually experience an accumulation of frost on the evaporator tubes and fins. The frost serves as an insulator between the heat to be transferred from the space and the refrigerant, resulting in a reduction in evaporator efficiency. Therefore, equipment manufacturers must employ certain techniques to periodically remove this frost from the coil surface.Methods for defrost can include, but are not limited to off cycle or air defrost, electric and gas (which will be addressed in Part II in the March issue). Also, modifications to these basic defrost schemes add yet another layer of complexity for field service personnel. When properly setup, all methods will achieve the same desired result of melting the frost accumulation. If the defrost cycle is not set up correctly, the resulting incomplete defrosts (and reduction in evaporator efficiency) can cause higher than desired temperature in the refrigerated space, refrigerant floodback or oil logging issues.
For example, a typical meat display case maintaining a product temperature of 34F may have discharge air temperatures of approximately 29F and a saturated evaporator temperature of 22F. Even though this is a medium temperature application where the product temperature is above 32F, the evaporator tubes and fins will be at a temperature below 32F, thus creating an accumulation of frost. Off cycle defrost is most common on medium temperature applications, however it is not unusual to see gas defrost or electric defrost in these applications. 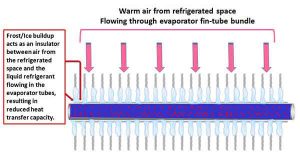 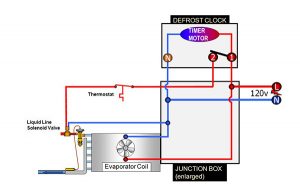 Figure 2 Typical defrost/pumpdown wiring diagram
Note that in a single compressor application where the defrost time clock initiates a pump-down cycle, the liquid line solenoid valve is immediately de-energized. The compressor will continue to operate, pumping refrigerant out of the system low side and into the liquid receiver. The compressor will cycle off when the suction pressure falls to the cut-out set point for the low pressure control.
In a multiplex compressor rack, the time clock will typically cycle off power to the liquid line solenoid valve and the suction regulator. This maintains a volume of refrigerant in the evaporator. As the evaporator temperature increases, the volume of refrigerant in the evaporator also experiences an increase in temperature, acting as a heat sink to assist with raising the surface temperature of the evaporator.
No other source of heat or energy is necessary for an off cycle defrost. The system will return to refrigeration mode only after a time or temperature threshold is reached. That threshold for a medium temperature application will be around 48F or 60 minutes of off time. This process is then repeated up to four times per day depending on the display case (or W/I evaporator) manufacturer’s recommendations. 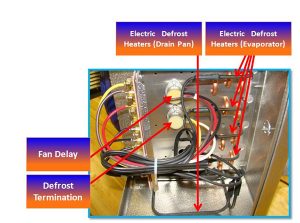 Electric defrost provides a more positive defrost than off cycle, with shorter durations. Once again, the defrost cycle will terminate on time or temperature. Upon defrost termination there may be a drip down time; a short period of time that will allow the melted frost to drip off the evaporator surface and into the drain pan. In addition, the evaporator fan motors will be delayed from restarting for a short amount of time after the refrigeration cycle commences. This is to ensure that any moisture still present on the evaporator surface will not be blown into the refrigerated space. Instead, it will freeze and remain on the evaporator surface. The fan delay also minimizes the amount of warm air that is circulated into the refrigerated space after defrost terminates. Fan delay can be accomplished by either a temperature control (thermostat or klixon), or a time delay.
Electric defrost is a relatively simple method for defrosting in applications where off cycle is not practical. Electricity is applied, heat is created and the frost melts from the evaporator. However, in comparison to off cycle defrost, electric defrost does have a few negative aspects to it: as a onetime expense, the added initial cost of heater rods, additional contactors, relays and delay switches, along with the extra labour and materials required for field wiring must be considered. Also, the ongoing expense of additional electricity should be mentioned. The requirement of an external energy source to power the defrost heaters results in a net energy penalty when compared to off cycle.
So, that is it for off cycle, air defrost and electric defrost methods. In the March issue we will review gas defrost in detail.

Dave Demma holds a degree in refrigeration engineering and worked as a journeyman refrigeration technician before moving into the manufacturing sector where he regularly trains contractor and engineering groups. He can be reached at ddemma@uri.com. Co-author Bob Schindler is a regional sales manager at KeepRite Refrigeration.