Metal to metal and the corrosion that ensues.

I freely admit that it may seem odd to lead off a plumbing article by quoting a 14th century mystic, but we are living in strange and uncertain times.

Julian of Norwich spent much of her life living in seclusion; she survived the Black Death, and she managed to write the earliest surviving book written in the English language by a woman.

I’ve merely spent a few weeks in semi-seclusion; I’ve managed to survive the Covid-19 pandemic, so far at least; and I’m struggling to write a few simple paragraphs of simple plumbing prose, hopefully they will survive till the next recycling run, so here goes.

Julian of Norwich in her day wrestled with timeless theological issues with eternal implications, and today I want to wrestle with the age old and contentious question of when, if ever, one should use a dielectric union when joining two dissimilar metals.

I will go ahead and state my opinion from the outset: I don’t believe one should ever use these diabolical and deceptive fittings, under any circumstance.

Yes, I am aware that many codes require them, many engineers specify them and many inspectors want to see them. Still, I will stand firm in my assertion that these fittings have no place in any plumbing or heating system.

In the case of plumbing and heating systems the electrolyte is the water in the system. The contacting metals form a bimetallic couple because of their different affinities (or attraction) for electrons. These different affinities create an electrical potential between the two metals, allowing a slight direct current to flow.

When these bimetallic couples form, one of the metals corrodes faster than it would all by itself, while the other corrodes slower than it would alone, or not at all. The metal that corrodes during galvanic corrosion is known as the anode, and the metal that doesn’t corrode is known as the cathode. Metals that are more cathodic are referred to as more noble metals. (See anodic chart) 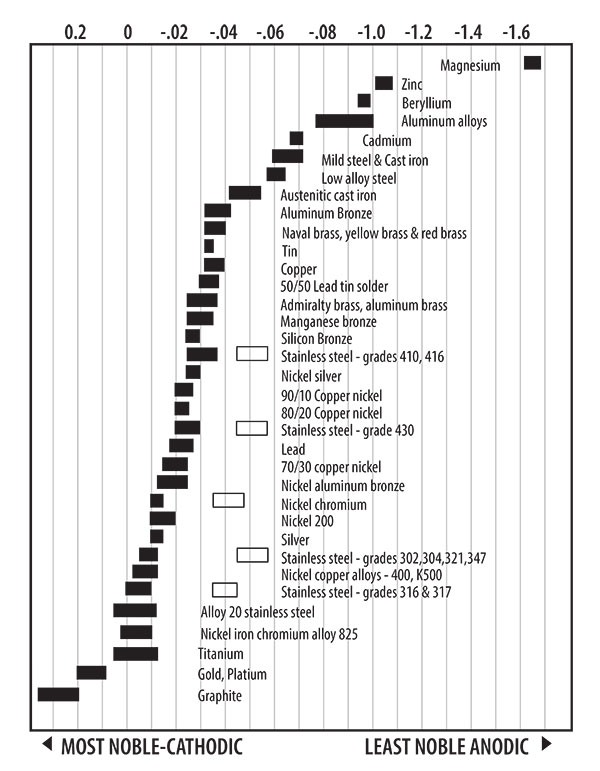 This process was discovered in the late part of the eighteenth century by Luigi Galvani in a series of experiments with the exposed muscles and nerves of a frog that contracted when connected to a bimetallic conductor. In the early 1800’s the discovery was put into a practical application by Alessandro Volta who used a series of dissimilar metal disks, separated by cardboard soaked with acid or saltwater solutions to build the world’s first electrical cells, or batteries.

his was the basis of all modern wet-cell batteries, and it was the first method found for the generation of a sustained electrical current.

Our industry has used this process in beneficial ways also, the most obvious example is the use of magnesium, zinc or aluminum in the form of sacrificial anode rods to protect steel hot water tanks from corrosion.

Now that we have (hopefully) a better understanding of the science involved, let’s go back to the argument of whether or not dielectric unions are an effective way to connect dissimilar metals in a plumbing system.

In these situations we have all three elements required to foster galvanic corrosion, two metals with different corrosion potentials, copper (cathode) versus steel (anode), direct contact between them as they are being connected, and the presence of a corrosive electrolyte being the water.

Preventing galvanic corrosion depends on removing one of these three elements. Dielectric unions have rubber gaskets and plastic sleeves that are intended to act as insulators which separate and break the electrical continuity between the two metals by removing the element of direct contact between the two metals.

In theory this should work to prevent the galvanic corrosion, but here is the problem: THEY DON’T WORK!

Not only do they not work, but they actually seem to make the problem worse. I am not alone in my opinion. Do a Google search and you will find countless plumbers with many years of experience posting the same opinion.

To quote just a few:

“…I am a licensed plumber for 20-plus years. When I started, it was code to install dielectric unions everywhere in houses where copper connects to steel. Every single union fails miserably by either leaking, clogging up completely, rusting to pieces”

“…My own home has some brass to galvanized steel connections in the basement that I meant to change out years ago, but they are holding fine and give no sign of trouble. The connections are probably 75 years old. I’ve seen dielectric unions fail within five years.”

I know this is all anecdotal evidence, but it is an opinion that is shared by virtually every experienced plumber I’ve spoken to, which adds up to hundreds of years of collective experience.

I also read the results of a study in 2013 done by Penn State University, Office of Physical Plant, Energy and Engineering Division, Engineering Services, which observed:

“Whenever a ferrous metal such as black steel is connected to a non-ferrous metal such as copper, a dielectric connection must be installed to prevent galvanic corrosion. The installation of a fitting with inert material between the two metals prevents the flow of electrons between the metals, preventing premature failure of the piping. Traditionally, dielectric unions have been installed to perform this function. However, dielectric unions are proven sources of leaking fittings, and should be avoided.”

In my experience, a 6-inch long brass nipple directly connected to the hot water tank or brass unions or couplings will yield much better and longer lasting corrosion free results than any dielectric union ever will.

Sometimes you won’t have any choice because a smarter-than-all-of-us engineer or inspector may insist on the diabolical dielectric, but when the choice is yours go with the brass, and in the words of Julian of Norwich, “All will be well, and all will be well and every kind of thing shall be well.” <>