The Duct Free Zone: History of the Mini Split

I had the pleasure of learning the history of the mini split from a man who actually lived it.

Well before my current role with Tosot Bathica based in Quebec, I did some contract work for Heat Controller, Inc. out of Jackson, Michigan. You may know them by the brand name Comfort-Aire.

I had the pleasure of learning the history of the mini split from a man who actually lived it, Mr. Don Peck, who was the CEO of Heat Controller at that time and an employee there for over 50 years.

Don was always proud to tell me that the FIRST mini split was developed by Heat Controller. Here are his exact words: 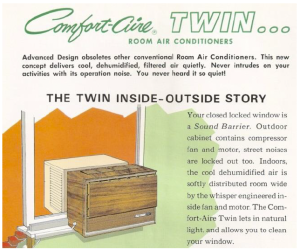 “The first introduction in 1965 was the Comfort-Aire Twin which was a window air conditioner with a split cabinet design that allowed the window to close into the center of the unit with the compressor and the condenser fan on the outside of the window and the indoor fan on the inside making for a very quiet application.” 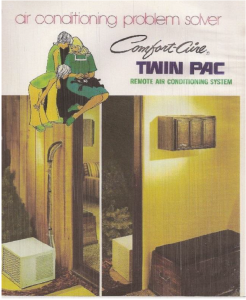 Here is an actual piece of literature for the Comfort-Aire Twin Pac. Look at the indoor unit…seems like EVERYTHING was woodgrain back in the 70’s!

The Twin Pac, the first mini split, was an offshoot of the Twin and was originally developed for Sears in 1969 and went by the name “Sears Modular Central Air Conditioning System”. The unit was offered in two sizes, a 6000 (115 V) and 16000 (230 V). The original units had only 8-ft. of refrigerant lines and were quick connect and included a double wrench kit for making the connection.

In 1971 the Twin Pac was made available under the Comfort-Aire label. Three sizes were then offered, (6000, 11000 and 16000). The line set accessories were also changed to allow for up to 19-ft between the indoor and outdoor units. The product went away when the federal government instituted the first Energy Efficiency Ratio (EER) rating of 8.0 in the late 1980’s, as the product was classified as a split system rather than a room unit.

Don always made a point to say that in 1974, the Comfort-Aire Twin Pac won the product of the year award in the state of Michigan. It beat out the 1974 Ford Mustang.

Now, you might say that just about anything should have beaten this car, but those of us who are old enough to remember know that Ford sold a bunch of these cars and for any non-automotive product to win in Michigan was unheard of at the time.

Now, let’s climb into the 1982 DeLorean DMC-12 and set the flux capacitor to 2021 … 52 years forward from the introduction of the first mini split in North America.

In those 52 years we went from the lunar module to the space shuttle to Space-X.

Gerry Wagner is the vice president of business development for Tosot Bathica in Châteauguay, Quebec. He has 41 years in the HVAC/R industry working in manufacturing, contracting and training. You can contact Gerry by at GerryWagner@Bathica.com.  TOSOTamerica.com