The Carlson-Holohan Industry Award has a new home 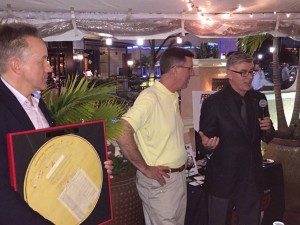 John Goshulak (l), recipient of the 2016 Carlson-Holohan award, Dan Holohan and Robert Bean (r) at the awards presentation in January.

The Carlson-Holohan Industry Award of Excellence has found a new, permanent home inside The General Society of Mechanics and Tradesmen of the City of New York building, located in New York City. The General Society was founded in November of 1785 and offered cultural, educational and social services to the families of skilled craftsmen. Currently, it is the oldest, privately endowed tuition-free technical school in New York City.

The award is presented every two years to individuals who are known for their dedication to training, mentoring and raising funds for philanthropic causes on behalf of the steam and hydronic industry.

John Goshulak of Weil-McLain Canada, is the 2016 inductee, following HPAC contributor John Siegenthaler, who held the award from 2014 to 2016.