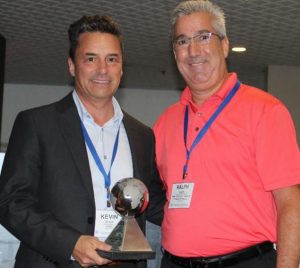 The award is in recognition of Ernst’s contributions to Canadian plumbing codes and standards.

“The honour is bestowed to those in our industry who share their knowledge and expertise in developing safer plumbing codes and standards through Canadian code development committees and the Canadian Advisory Council on Plumbing. Kevin is one of the new breed of codes and standards developer that we critically need. He has been an integral part of the codes and standards development community in both Canada and the U.S., participating on several technical committees, task groups and industry advisory bodies over the last 25 years,” said Ralph Suppa, president and general manager of the Canadian Institute of Plumbing & Heating.

“Kevin has led the Plumbing Industry Advisory Council with passion and vision. He has been a sought after visionary, steady and reasonable voice as a part of every part of the system…” added Suppa.

In his acceptance speech, Ernst noted that the award was the result of the dedication of many people who he has had the honour of working with over the last two decades. “It truly was an honour to be recognized and to have the JKS award presented personally by Ralph Suppa. It’s a rewarding experience to be a part of the PIAC and CACP teams,” said Ernst. “My thanks to the PIAC members, Kevin Wong, and the CIPH board of directors. I would like to especially recognize and thank OS&B for their support of my volunteer work.”

The award was established by the CIPH Board of Directors in November 2000 to honour Joe Seidner, the first recipient and an industry leader and friend of CIPH. Seidner passed away in 2003 at the age of 96.  The award honours his legacy in the standards community.

The Canadian Advisory Council on Plumbing provides a forum for industry, regulators, and product certification organizations to share new concepts and ideas, to discuss policy and programs, and to review innovations and new technologies that affect plumbing standards, as well as the certification and testing of plumbing products.