Quebec's decision to shut down non-essential construction activity due to the COVID-19 pandemic led to it posting its largest month-over-month percentage decline on record. 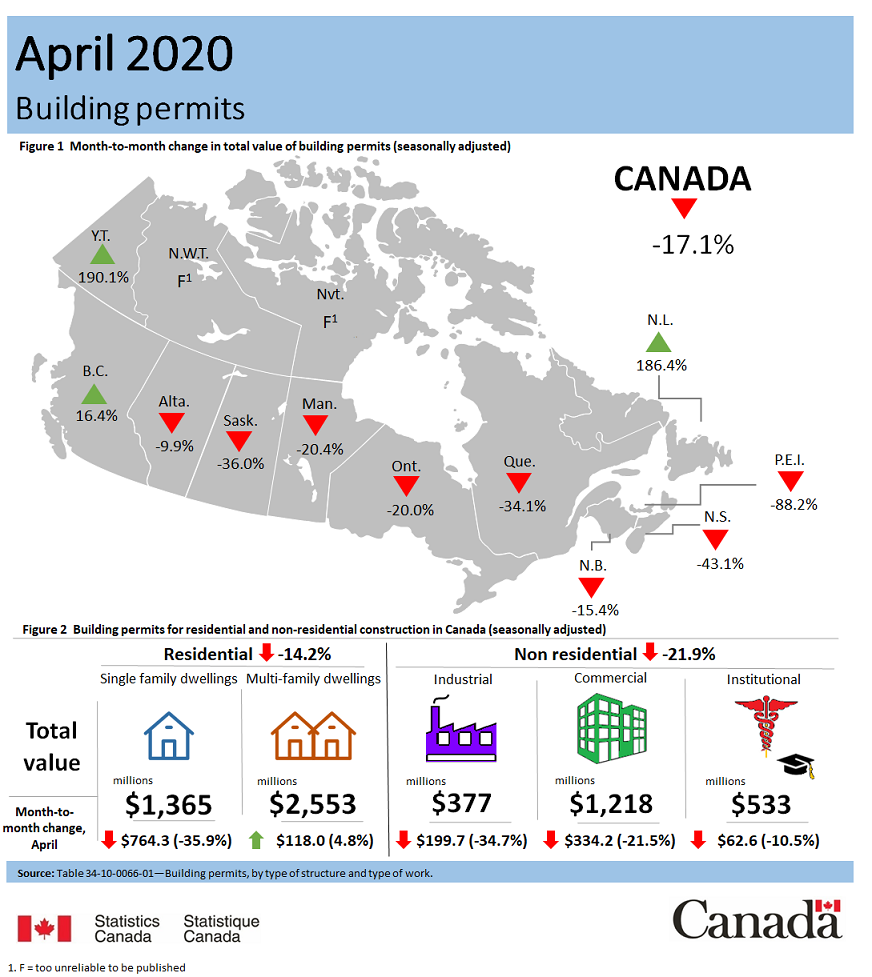 The first full month of the COVID-19 pandemic shut down has resulted in the total value of building permits issued by Canadian municipalities dropping month-over-month by 17.1% to $6.0 billion.

The decrease in April was the largest decline since a similar drop in October 2008 during the financial crisis. When combined with the March decline, the value of building permits has fallen by 28.1% from February levels.

Declines were reported in eight provinces, with the largest in Quebec (-34.1%) and Ontario (-20.0%). Although most municipalities were still issuing permits in April, Quebec’s decision to shut down non-essential construction activity due to the COVID-19 pandemic led to it posting its largest month-over-month percentage decline on record.

The total value of residential permits was down in nine provinces in April, falling 14.2% to $3.9 billion nationally.

Using comparable data available back to 2002, permits issued for single family dwellings fell 35.9% to $1.4 billion, a record month-over-month decline and almost double the next largest decrease.

Multi-family dwellings did show an increase at the national level in April, up 4.8% to $2.6 billion. Increased building intentions in the metropolitan areas of Vancouver, Toronto and Ottawa led to gains in B.C. and Ontario, which offset declines in six provinces.

The gains in B.C. returned the value of multi-family permits to more normal levels, following large drops in the previous two months. The decreases in February and March were the result of a large number of permits being pulled forward into January as builders looked to avoid a scheduled fee hike in Metro Vancouver.

The value of commercial permits was down 21.5% to $1.2 billion in April with the largest decline reported in Quebec (-56.6%), setting another record month-over-month percentage decrease for the province.

Major projects in the form of schools and nursing homes helped drive gains for institutional permits in some parts of the country. However, growth reported in six provinces failed to outweigh sharp declines in Ontario (-46.2%) and Quebec (-28.2%), which pulled the national total down 10.5% to $533 million.