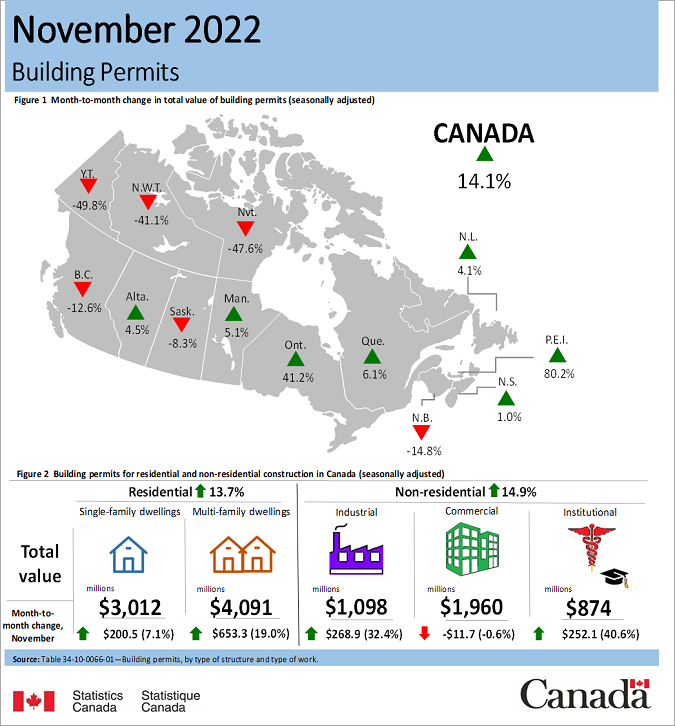 Statistics Canada has announced the total value of building permits in Canada jumped 14.1% in November to $11.0 billion, rebounding after two consecutive monthly losses.

The value of residential permits increased 13.7% to $7.1 billion nationally in November.

The value of building permits in the multi-family home component was up 19.0%. Ontario contributed to much of the growth with 21 permits for new condominiums and apartments valued at over $10 million. The total number of planned dwelling units in Ontario grew 60% month over month, returning to historical averages reported over the last three years.

The total permit value of the non-residential sector rose 14.9% to $3.9 billion in November.

The value of permits in the institutional component strongly increased (+40.6%). Much of the gain was because of a new courthouse planned for development in Toronto valued at just over $500 million. This project helped offset losses posted in six provinces.

The value of building permits in the industrial component showed a strong progression (+32.4%) following significant gains the previous month. Ontario led the way with a $425 million permit for a manufacturing plant in Toronto.

Construction intentions in the commercial component edged down 0.6%, mostly because of losses posted in British Columbia.